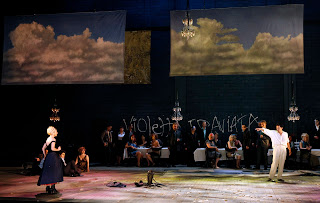 Even the most casual opera goer, has probably seen at least one production of Verdi’s La Traviata. For the second or subsequent viewings, you want to know not just what famous singers will entertain you but what the director is bringing to the table to entice you to cough up some major dough.

La Traviata is the most popular offering of the Aix-en-Provence Festival and if you combine that with Natalie Dessay singing the leading role, you will have a full house that will not want to stop applauding. At least that is what happened at the Théâtre de l’Archevêché the night that I saw the opera.

No one could disagree with Dessay’s splendidly sung and emotionally wrenching performance. Because of directorial shenanigans (more about this later) the opera starts slowly and the singers do not take control of their characters. But once Dessay takes control she delivers a beautifully sung and acted performance.

American tenor Charles Castronovo was not a very passionate or convincing Alfredo in the first scene. He is forced by the other guests to sing the rousing “LIbiamo” and he is not very ardent in his declaration of love to Violetta. He soon warms up however and delivers marvelous singing and acting. Whatever shortcomings there were, are all directorial choices.

Baritone Ludovic Tezier delivers the finest performance after Dessay in the role of Giorgio Germont. “Di Provenza il mar,” his signature aria, suffers and benefits from familiarity. We all know the type of sonority and moving conviction that we want from a father who wants to convince his son to come home. It is difficult to blow the aria completely but it is even more difficult to deliver a pitch-perfect and thrilling performance. Tezier does.

The London Symphony Orchestra played Verdi’s lush music under the baton of Louis Langrée and the Estonian Philharmonic Chamber Choir did a fine job.

After the singers and the orchestra and chorus, we look to the director, set, costume and lighting designers to put their stamp on the production and give us something memorable. The costumes were modern chic clothes, the type worn by people who want to make an impression. Good.

The set in the opening scene consisted of a large room with a few chairs and tables shoved on the sides. The walls were dark and someone wrote on the back wall the word Violetta, the name of the well-off courtesan who is throwing a fancy party in Paris. For reasons that are best known to the director and the designer, this Violetta is living in a warehouse. Forget the Zeffirellian excesses of red velvet and huge chandeliers. Set Designer Alexandre de Dardel is not interested in giving us a realistic set and that’s fine, But what is it supposed to be?

In the second act, Alfredo and Violetta live in the country and are not much for furniture or general housekeeping, it seems, despite the availability of servants. They sleep on the floor but that’s because they are broke and Alfredo has not noticed it.

There are a number of panels that pop up or are brought down. A couple of them show fun parties but we do not see anything like that on tstage. Some other panels show clouded sky and then are lowered and disappear in the floor. I am sure they mean something.

At the opening scene party, the guests are stuck on the sides of the warehouse and Alfredo, as I indicated, is forced to sing. Flora’s party in Act II is just as deadly and at the end when Alfredo acts like a jerk and is slapped by his father, several women just collapse on the stage.

The final scene takes place in Violetta’s apartment where she is dying. She is living in the warehouse furnished with only two chairs. In the final seconds of her life, she is on her feet, walking towards the audience with no one near her. When death arrives she collapses on the floor from a standing position.

Each director brings his own vision and interpretation of an opera to the stage. That interpretation must flow from the work and make sense. Last year in the same theatre, Russian director Dmitri Tcherniakov produced an original and brilliant Don Giovanni despite taking considerable liberties with the plot.

Director Jean-Francois Sivadier has shown more directorial self-indulgence than creative genius. Of all the quirky things that he does I must admit that there was one that worked, yes, brilliantly. When I saw Dessay walking towards the audience, seconds before she is to die, I could not figure out what was going on or about to happen. There was no one near Dessay and there was no furniture around her. Is he going to let her die standing up? At the last second, she dropped dead on the floor and the lights went out. That is a stupendous coup de théâtre.
_____

La Traviata by Giuseppe Verdi opened on July 6 and was performed ten times until July 22, 2011 at the Théâtre de l’Archevêché, Aix-en-Provence, France. www.festival-aix.com
Posted by James Karas at 3:12 AM