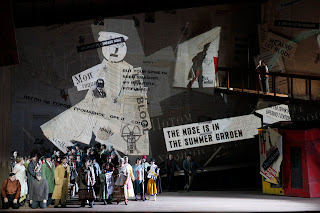 Those who saw Robert Lepage’s production of Igor Stravinsky’s The Nightingale and other fables with the Canadian Opera Company in Toronto or the same staging at the Grand Théâtre de Provence (in French, Le Rossignol et autres fables) in Aix-en-Provence, recall an opera that pushed the boundaries of spectacle and provided something innovative and exciting.

The Aix-en-Provence Festival is repeating that feat with another Russian product, albeit quite different from Stravinsky’s work. This year they are mounting Dmitri Shostakovich’s Le Nez (The Nose) in a mind-blowing production by William Kentridge.

It is a co-production with New York’s Metropolitan Opera and it was seen at Lincoln Centre in March 2010. It has now found its way to Aix.

Shostakovich wrote The Nose between 1927 and 1928 and it premiered in Leningrad in 1930. It was not produced in the Soviet Union again until 1974 although it did get several productions in Europe. By and large the work has been ignored but the current production is generating considerable excitement.

The plot, based on a story by Nicolai Gogol, is a surrealist tale about a civil servant who loses his nose. Collegiate Assessor Kovalyov (Vladimir Samsonov) is shaved by barber Ivan Yakolievich (Vladimir Ognovenko). Next morning, the barber finds a nose in his bread and his wife Praskovia (Claudia Waite) suspects he chopped it off the face of one of his customers. She orders him to get rid of it. He does by throwing it in the river but is caught by the police.

In the meantime, Kovalyov, wakes up without a nose. Naturally, he is quite upset and runs to the police to report the missing anatomical appendage.

In the meantime, the Nose has taken on a life of its own and, dressed as a State Councilor it is seen praying in the local cathedral. When its owner orders it to return home, the Nose refuses because it has higher social status than Kovalyov. End of Act I.

The police, townspeople and others join the search for the Nose and it is finally found, given a thrashing and returned to the rightful owner by the Police Inspector (Andrey Popov) who demands a handsome bribe.

A love interest enters the plot, the nose does not fit but order is eventually restored.

Kentridge has created a whole world around the plot and Shostakovich’s music. First of all he uses video projections of people and animated figures with extraordinary inventiveness and effectiveness. When the opera opens, the stage is covered with a backdrop of newspaper clippings. In the upper left corner we see a small opening and the barber shop scene unfolds. It is a short scene and we quickly switch to another small hole in the curtain where the barber finds the node in his bread.

We see moving pictures and stills of people on the screen, including some of the composer. There are countless animated images including ones showing the living Nose riding a horse.

There are about 70 or 80 live people on stage who are channeled into various groups and run around the stage reminiscent of the Keystone Kops at times. The principals are also there, of course, such as the Nose (Alexandre Kravets), Kovalyov’s servant Ivan (Vasily Efimov), The Doctor (Gennady Bazzubenkov), Madame Podtotchina (Margarita Nekrasova) and her daughter (Tehmine Yeghiazaryan). Most of these singers take more than one role.

Kazushi Ono conducted the Orchestra and Chorus of the Opera of Lyon.
This is a fast-moving and complex opera. The images projected on the screen or seen on the stage are so many that you can hardly keep up with them. I found myself jumping between listening to the exciting music or following the action on the stage and being unable to keep up. One needs to see this opera more than ones to begin enjoying it.

Le Nez by Igor Stravinsky opened on July 8 and was performed four times until July 14, 2011 at the Grand Théâtre de Provence, Aix-en-Provence, France. www.festival-aix.com
Posted by James Karas at 4:46 PM