THE HORSE AND HIS BOY – REVIEW OF SHAW FESTIVAL PRODUCTION

Director Christine Brubaker with the artistic team treat the fantasy with a light touch, full of humour, humanity and adventure. The people and the horses go through difficulties and battles, they learn some lessons and in the end decency triumphs and they find happiness. The result for the audience is simply delightful. 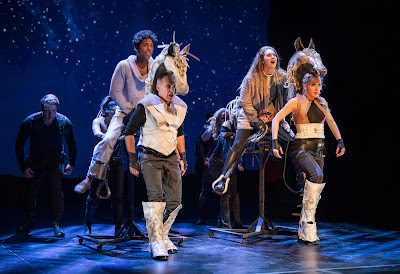 Jay Turvey as Bree, Matt Nethersole as Shasta, Madelyn Kriese as Aravis and Kristi Frank
as Hwin with the cast. Photo by Emily Cooper.
A large, helpful map is projected to inform us of the whereabouts of the mythical land of Narnia and its neighbours. We will travel a long way and we need to know where we are.

A lively boy called Shasta (Matt Nethersole) is about to be sold into to slavery. He meets an enslaved talking horse called Bree (Jay Turvey) and they decide to escape from neighboring bad Calormen to good Narnia. They meet the lovely Aravis (Madelyn Kriese) who is being forced to marry a jerk. She has a talking mare called Hwin (Kristi Frank) and the four decide to take the great but dangerous trek across the desert.

Turvey and Frank as Bree and Hwin, wear horses’ heads over their own in a fine example of simple but effective costuming. They have saddles on wheels and tails when necessary with an actor helping with the movement of both. Well done. And these are no ordinary talking horses. They are intelligent, have different personalities and are highly entertaining. They are convincing as horses and people.

The escapees travel though the enemy territory of Calormen and they hear of a plot to invade Narnia. You see bad prince Rabadash of Calormen (George Krissa) wants to marry good Queen Susan of Narnia (Jacqueline Thair) without the usual precursor to the event such as asking her.

The adventures continue as the escapees cross the desert and meet the lion Aslan (Jenny L. Wright, who also plays the Hermit) who scares the daylights out of them. But they do reach their destination on time and the good guys win and Rabadash is turned into a donkey.

The production has the necessary pacing of a fairy tale, the adventures and the humour to keep the young and the not-so-young entertained. Lewis invests his stories with deeper meanings and they are elevated from being simple tales for children. 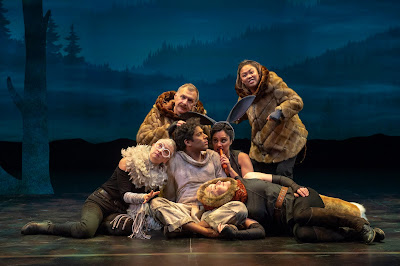 Matt Nethersole as Shasta with the cast of The Horse and His Boy.
Photo by David Cooper.
Jennifer Goodman provides colourful designs with projections by Cameron Davis. Siobhan Sleath is responsible for the lighting design of the changing worlds of The Horse and his Boy.

The audience is always an important component of watching a play. I saw the performance in the morning of May 9, 2019 and the audience consisted largely of primary and high school students. Many of them had attended a workshop about the play that morning and were knowledgeable and primed up for the show. They yelled out “may he live forever” at the mention of Tisroc, the dictatorial monarch, and displayed a wonderful liveliness and participation in the performance.

All the above elements combine for a marvelous children’s story, an excellent show for  adults and a superb morning (or evening) at the theatre.
____________
The Horse and His Boy by C. S. Lewis adapted for the stage by Anna Chatterton and directed and dramaturged by Christine Brubaker will run in repertory until July 21, 2019 at the Festival Theatre, Niagara-on-the-Lake, Ontario. www.shawfest.com.