THE BROTHERS SIZE – REVIEW OF McCRANEY'S PLAY AT SOULPEPPER

The Brothers Size is a powerful play about three black people, two brothers and a friend, set in Louisiana in what the author calls the “distant present”. It has ritualistic elements, the characters often speak in the third person and we get a play of rare power and poetic resonance that presents moving relationships amid the unspeakable condition of blacks in the south.

The Brothers Size is the second part of a trilogy by Tarell Alvin McCraney that he calls the Brother/Sister Plays. The play is set in the fictional town of San Pere, Louisiana near the bayou.  The two brothers are Ogun Size (Daren A. Herbert) and Oshoosi (Mazin Elsadig) and the third character is Elegba (Marcel Stewart). The latter is Oshoosi’s best friend, prison mate and lover. 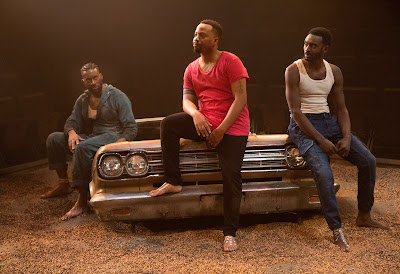 Daren A. Herbert, Marcel Stewart, and Mazin Elsadig, photo: Cylla von Tiedemann
Ogun is the older brother and he is a serious man, and car mechanic who owns his own business. Oshoosi is another story. He is fresh out of prison and wants to live it up. With no money, no job and no desire to work, that is difficult to achieve. He dreams of the good life especially the desire to have a car. Ogun offers him a job and tries to help him and guide him so that he does not end up in prison again.

As if that were not enough, Elegba arrives on the scene. He works in a funeral parlour but wants to have a good time too. He brings a car for Ogun to repair and he makes a gift of it to Oshoosi because he has no driver’s license. Ogun knows instinctively that Elegba is dragging his brother in the wrong path but realizes that he can do nothing about it.

The two friends go for a ride and are caught with a pound of powder. I will not tell you the dramatic conclusion of the play.

Director Mumbi Tindyebwa Otu does the play in a theatre-in-the round on the Michael Young stage of the Young Centre for the Performing Arts. We see only the front end and windshield of an old car in the playing area while the rest of it is buried. The car plays an important part in the play both as a symbol of Ogun’s success as a mechanic and as the vehicle that may destroy Oshoosi. We feel the heat of the beating sun in Louisiana in a set that is both realistic and surreal. The set is designed by Ken MacKenzie.

There is rich musical accompaniment by composer and percussionist Kobèna Aquaa-Harrison. 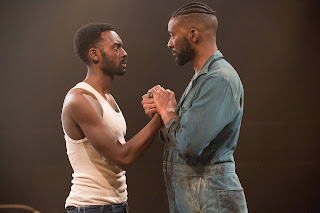 Mazin Elsadig and Daren A. Herbert, photo: Cylla von Tiedemann
The rich language with its poetic resonance is occasionally understood more by its musicality than strict comprehension of the meaning of some words. It is the patois of the blacks of Louisiana that adds another layer to the rich texture of the play.

McCraney uses a technique of involving us in the action and at the same time telling us to step back. What would normally be stage directions, in this play are spoken by the characters. “Ogun goes under the car,” “Ogun comes from under the car” are lines spoken by Ogun. This applies to the characters’ emotional reactions.

Elsadig, Herbert and Stewart give superb performances in a play that is masterfully directed by Otu. This is an outstanding production that broadens our theatrical horizons. Theatre at its best.

The Brother/Sister Plays trilogy consists of In the Red and Brown Water, The Brothers Size, and Marcus; Or the Secret of Sweet. Is there any reason for delaying production of the other two plays?
____________
The Brothers Size by Tarell Alvin McCraney continues until June 1, 2019 at the Young Centre for the Performing Arts, 55 Tank House Lane, Toronto, Ontario. www.soulpepper.ca.

James Karas is the Senior Editor - Culture of The Greek Press. www.greekpress.ca/