Well, not quite. The fact is they came, they entertained us brilliantly and they left before most of you got wind of it. Too bad for you.

I speak of the Eifman Ballet of St. Petersburg which gave only three performances of Boris Eifman’s ballet TCHAIKOVSKY – PRO ET CONTRA – at the Sony Center in Toronto on May 9, 10 and 11, 2019.

TCHAIKOVSKY is a combination of theatre and ballet as developed by Eifman. As with his other works, Eifman examines the life of the composer through his music and zeroes in on some of his life’s experiences. But this is not a story in the narrative sense but in the balletic and psychological method that can express experiences through dance. 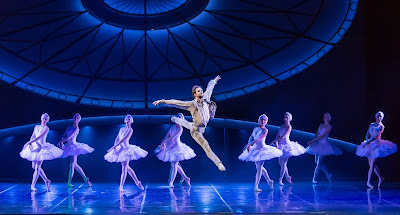 The programme begins and ends with Tchaikovsky’s death when past experiences and scenes from his life reappear to him. The first act uses music from Symphony No. 5 and the Liturgy of St. John Chrysostom and Oleg Gabyshev as Tchaikovsky with members of the company takes us through scenes in the composer’s life. We see the people that help and haunt him in the real and phantasmagorical world of his emotions.

Tchaikovsky’s patroness Nadezhda von Meck (Alina Petrovskaya) who provides the financial means for him to be able to compose and Antonina Milyukova (Lyobov Andreyva), the woman with whom he had a disastrous marriage also appear. In his emotional torments he sees himself as Rothbart, a guardian angel and Drosselmeyer, an evil demon, both are danced by Igor Subbotin. Through all of this he is able to create The Nutcracker.

In the second act, Tchaikovsky’s torments continue as he is torn between the desire to conform, his need to create and the realities of his impecuniosity and homosexuality. Von Meck’s money provides the means of survival and creativity gives him the way to escape into the heroic milieu of Pushkin’s Eugene Onegin and the world of gambling in The Queen Spades. 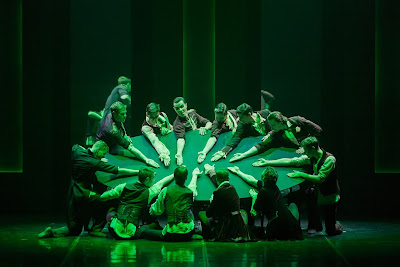 The second act includes music from the Serenade for Strings, Capriccio Italien and Symphony No. 6, the “Pathétique.” All the music is unfortunately prerecorded and we have to rely on the Sony Centre’s speakers for it.

This is ballet with a difference. It is rich, nuanced and with biographical and literary allusions to make your head spin. The dancing is outstanding and richly textured. Eifman has combined elements of classical ballet with new ideas about theatricality and plot.

Next time you hear that the Russians are coming think of ballet and not the current news.
___________
TCHAIKOVSKY – PRO ET CONTRA, a ballet by Boris Eifman with music by Pyotr Tchaikovsky presented by Showone Productions was performed three times on May 9 – 11, 2019 at the Sony Centre, 1 Front St. E. Toronto, Ontario. https://showoneproductions.ca/  http://www.eifmanballet.ru/en/

James Karas is the Senior Editor - Culture of The Greek Press.  www.greekpress.ca