Getting Married, one of the two plays by Bernard Shaw offered by the Shaw Festival this season, gets is a solid production directed by Tanja Jacobs with a number of aspects that deserve praise and others that attract comment.

The 1908 play is a talkfest in the Shavian manner of taking a main subject and expanding the conversation into numerous byways. In this play Shaw takes on marriage and his characters discuss divorce, sex, politics, the position of women and the social order in England in the late Victorian and Edwardian periods. Jacobs brings the action to 1950 by which time some things had changed but many remained the same. 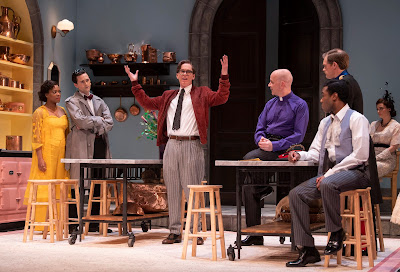 Steven Sutcliffe as Reginald Bridgenorth with the cast.
Photo by Emily Cooper.
The scene is the spacious kitchen of the palace of the Bishop of Chelsea and Edith, his sixth daughter, is getting married. On the morning of the wedding breakfast preparations are apace and family members arriving.

The wide-ranging conversations that ensue have a drive of their own but the dialogues  need careful pacing to keep the play moving. Jacobs and the fine cast stickhandle this adroitly overall but there are some lapses. Getting laughs is not always easy and Jacobs adds some pratfalls, tripping over furniture and double-takes that evoke laughter. The rest of the entertainment rests on the ideas and reactions of some of the characters.

Bishop Bridgenorth (Graeme Somerville) is a wise, open-minded cleric, who gives the devil his due as he listens to opinions about the sanctity of religious marriages, contractual unions and polygamy. Somerville exudes the wisdom and devilish wit of the Bishop who is a dominant character.

His brother General “Boxer” Bridgenorth (Martin Happer) is a thick-headed and bemedaled officer who trips over the furniture and is forever proposing marriage to the intelligent and independent Lesbia (Claire Julien) who is forever rejecting him in no uncertain terms. Marriage is not for her. He can think of nothing else but marriage. Happer does well as the somewhat ridiculous and broadly comic general.

The dozen characters in the play fulfill a number of views of marriage.  Edith (Katherine Gauthier) and Cecil Sykes (Cameron Grant), the couple that is getting married, change their mind. They find out by reading a pamphlet that marriage can be a dangerous undertaking. If he becomes a lunatic you cannot divorce him and if she runs up debts, you are responsible for them. Gauthier and Grant are entertaining and intriguing in looking for something like a reasonable marriage. How about make it simply contractual?

Lesbia wants children but not a husband and she cannot have the former without the latter. Makes no sense especially when the choice of husband is a fool like the general. Julien as Lesbia strikes the balance between independence and common sense with good arguments.

The bishop’s brother Reginald (Steven Sutcliffe) and his almost divorced wife Leo (Monice Peter) illustrate the state of divorce laws brilliantly. Leo is a free spirit who wants and maybe needs more than one husband. In order to divorce Reginald, they had to manufacture an assault and an affair with a prostitute. Leo’s next husband-to-be Hotchkiss (Ben Sanders) shows up to complicate matters. The three are free spirits and the actors do a great job with them. 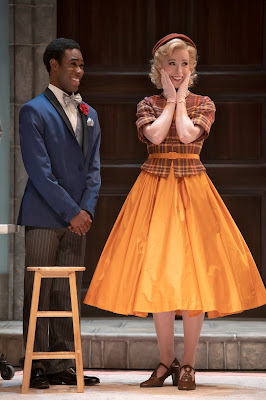 Cameron Grant as Cecil Sykes and Katherine Gauthier as Edith Bridgenorth.
Photo by David Cooper.
Reverend Oliver Crowell Soames, a lawyer, tries to draft a marriage by contract. Mrs. George Collins (Marla McLean) turns up. She a mysterious woman of many talents. She is a clairvoyant, she goes into a trance and you will just figure her out for yourself after giving kudos to McLean for her performance.

The set by Shannon Lea Doyle shows a kitchen with a couple of tables and stools as well as hanging copper pots and pans. The small stage of the Royal George Theatre does not allow for much grandeur but the set is more than adequate.

Professor Higgins tells us that “an Englishman's way of speaking absolutely classifies him” but in this production there are almost no such differences in speech. For example, William Collins (Damien Atkins), the green grocer would be immediately distinguishable by his accent from the upper crust Bishop. There would be gradations in accents to indicate social status. They may all be English but in this production, all spoke in our local style. So be it.

Be prepared for a wide range of arguments on numerous issues, done well, and you will enjoy the production.
____________
Getting Married by Bernard Shaw will run in repertory until October 13, 2019 at the Royal George Theatre, Niagara-on-the-Lake, Ontario. www.shawfest.com.