Near the end of Old Stock: a refugee love story, The Wanderer asks the audience if they are wondering “Why the f… did I come to see this show?” The answer may be that it is a play by Hannah Moscovitch at the Tarragon Theatre and that counts for a dozen good reasons.

Moscovitch is one of Canada’s best playwrights and between the dross and the noise of Old Stock there is a beautiful love story about a Jewish couple who came to Canada in 1908. It is moving, humorous, humane and a part of Canadiana that is not told often enough. 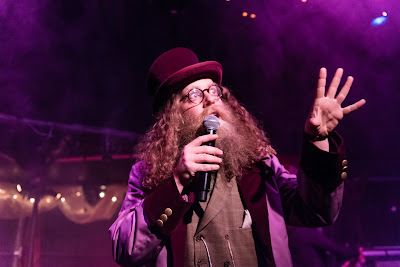 Ben Caplan  Photo: Stoo Metz Photography
Unfortunately that story is crushed between ear-shattering noise, singing and stand-up comedy reminiscent of a second-rate comedian desperately trying to get a laugh and ruining even good material.

The narrator, singer, stand-up comic is The Wanderer (Ben Caplan) who tells the story from today’s point of view, replete with four letter words and references to current issues. With his long beard and hair, he looks patriarchal, almost a parody of a Jew. He sings some melodic songs about Jewish life and traditions but at such decibel levels that you wish you had brought ear plugs with you. The Tarragon Theatre is quite small and use of loud, very loud speakers and talking into a microphone as if you were about to eat it is unnecessary, no, make that annoying.

The real story. Chaim (Dani Oore) and Chaya (Mary Faye Coady) arrive in Halifax and meet at Pier 2 in 1908. He is shy, diffident, inept and full of hope. He has escaped after the pogrom. Chaya is intelligent, outspoken and realistic. She has escaped before the pogrom with most of her family. Her husband and child died in Romania and she will never stop loving them or forget her old country.

Haltingly, humourosly, movingly, the two get married and after some very awkward steps manage to have a child. Their marriage is not perfect but they remain together and have four children. In the last few minutes of the show the story of Chaim and Chaya is told down the generations to the present as the family grows in numbers and success stories. 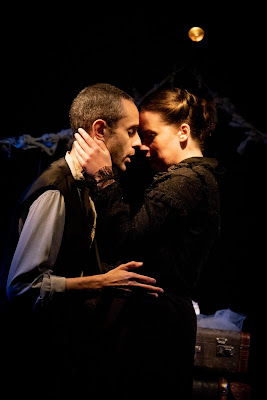 Dani OOre and Mary Faye Coady. Photo: Graeme Braidwood
The story of Chaim and Chaya Moscovitch is the beginning of the family history of Hannah Moscovitch. It is a marvelous tribute to the first members to arrive in Canada and face bigotry, anti-Semitism and hardship (only gentiles allowed to go to the cinema) and yet survive to have a Hannah as a descendant.

A four-person band is on stage all the time helping with some of the beautiful songs ruined by excessive loudness and a ridiculous Wanderer. Oore plays woodwinds and Coady plays the violin. They simply step away from their instrument when they act out the story of their characters. Graham Scott plays keyboard and accordion and Jamie Kronick plays the drum set.

Old Stock is created by Moscovitch, Ben Caplan and Christian Barry and the latter two are responsible for all but one of the songs. Barry also directs the show and most of the responsivity for the production rests on him. The volume and the miking are clearly unnecessary, to put it politely. Turning the history of a family and hence a story about a significant part of Canada’s past into a work for the theatre is a great idea. Old Stock is not.

We came to see the show for many good reasons and got seriously shortchanged.
______
OLD STOCK: a refugee love story by Hannah Moscovitch, Ben Caplan, and Christian Barry, in a 2b theatre company production, continues until May 26, 2019 at the Tarragon Theatre, 30 Bridgman Ave. Toronto, Ontario.  www.tarragontheatre.com

James Karas is the Senior Editor – Culture of The Greek Press. www.greekpress.ca
Posted by James Karas at 1:59 AM