The Canadian Opera Company rounds off its current season with a grand production of Verdi’s 27th opera Otello. The stars of the production are Canadian bass-baritone Gerald Finley as Iago and the COC Orchestra conducted by Johannes Debus.

David Alden’s production is quite solid but it has enough eccentric touches to send your eyebrows to the back of your head.

Otello starts as a great love story between a black general in the Venetian army and the high-born and pure Desdemona. The story and the conflict are driven by the malevolent Iago whose hatred of Otello for passing him over for promotion leads him to destroying the loving couple. 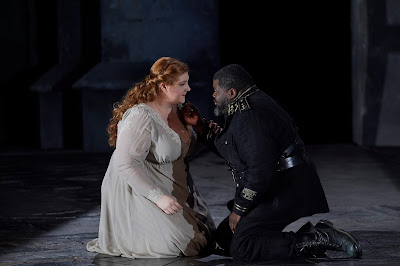 Tamara Wilson as Desdemona and Russell Thomas as Otello. Photo: Michael Cooper
Finley with his big, sonorous voice and commanding presence quickly establishes vocal and personal dominance. The Venetian gentlemen Roderigo (Owen McCausland) and Cassio (Andre Haji) cower under his authoritative persona. Otello, a successful general is no fool but Iago manages to find a way to drive him insane with jealousy to the point where he follows instructions on how to murder his beloved Desdemona. Finley makes every aspect of Iago clear and alive for us.

All of that cannot be said about tenor Russell Thomas’s performance as Otello. Thomas has the physical attributes of the Moor. He is noble and impressive in the beginning and when he becomes ugly in his jealousy, he is frightfully menacing. Unfortunately, he is not always up to the vocal demands of the role. What we see physically is not translated into vocal power and emotional splendour. He is not helped by Alden’s directing and there is little passion and not enough fury in his dealing with Desdemona. In the end, and this is one of Alden’s idiosyncratic stagings, he dies “upon a kiss” about ten feet away from Desdemona.

Soprano Tamara Wilson as Desdemona is good in some of the almost Wagnerian outbursts but she does not quite measure up to all the emotional expressions demanded of the role.

The production gains a great deal from the playing of the COC Orchestra. From the initial burst of music representing the storm to the final death of Otello, we are treated to magnificent playing under the baton of Johannes Debus.

Verdi provides some heroic singing for the chorus and the COC Chorus responds with a splendid performance.

The set by Jon Morrell consists of large concrete walls that could represent a fortress or a port and they serve for all the scenes of the opera with minor adjustments. The costumes suggest 19th century attire and they are fine. 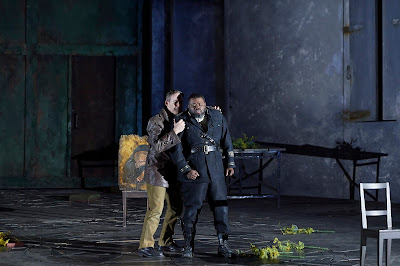 Gerald Finley as Iago and Russell Thomas as Otello. Photo: Michael Cooper
A couple more examples of Alden’s idiosyncrasies. At one point, Otello brings an icon of the Virgin Mary on the stage and hangs it on a wall. That seems quite appropriate because we are expecting Desdemona to sing “Ave Maria.” Instead we see Cassio shooting a few darts at the Madonna and the icon is soon removed. Why the display of such sacrilege by Cassio is a mystery to me.

Otello commands Desdemona to go to bed in her white wedding nightgown. There is no bed in this production and we see Desdemona crouching on one side of the stage and Otello across at the other side. Eventually he strangles her in the centre of the stage on the floor.

Otello kills himself after realizing what Iago did to him and what he did to Desdemona. Otello usually stabs himself with a dagger and falls upon Desdemona and his last words are “a kiss…another kiss…another kiss.” In this production Otello slashes the side of his neck and falls about ten feet from Desdemona. One is grateful that he does not do the completely comic act of slashing his throat and continuing to sing but slashing the side of his neck is almost as bad and dying that far from Desdemona is pretty ridiculous.

These directorial quirks need not be more than eyebrow raisers but Alden really packs them in and I am not quite sure why. Once your eyebrows return to their natural place, some gripes aside, the production becomes thoroughly enjoyable.
______________________
Otello by Giuseppe Verdi is being performed eight times on various dates until May 21, 2019 at the Four Seasons Centre for the Performing Arts, 145 Queen Street West, Toronto, Ontario. Tel: 416-363-6671. www.coc.ca

James Karas is the Senior Editor – Culture of The Greek Press. www.greekpress.ca
Posted by James Karas at 1:33 AM