Director Bartlett Sher seems to have cornered the market for imaginative, indeed brilliant, productions of classical musicals and numerous operas at the Metropolitan Opera. His production of My Fair Lady, now running at the Vivian Beaumont Theatre at Lincoln Center is yet another example of his superb directorial talent.

This Fair Lady gets a lavish production with a superb cast done to high standards that define the American musical at its best. The fair lady is Laura Benanti who has a ringing voice and sculpted face making a delightful Eliza. It is no wonder that Freddy Eynsford-Hill (Christian Dante White) dotes on her and hangs outside the house on the street where she lives belting out, well, "On the Street Where You Live." 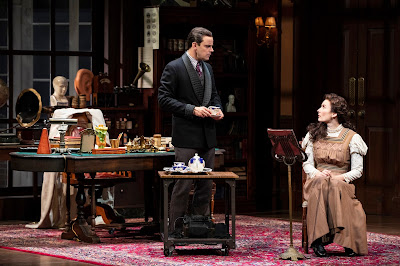 Harry Hadden-Paton and Laura Benanti. Photo: Joan Marcus
Eliza of course needs a suitable counterpart in the upper crust, ill-mannered, gruff and confirmed old bachelor Professor Higgins who wants to fashion a lady out of a squashed cabbage leaf. The man to do all of that and sing is Harry Hadden-Paton. He is young (OK, and handsome too) and quite impressive and funny in his rudeness. But does he eventually get his creation to marry him? Check Bernard Shaw and Alan Jay Lerner for possible answers. Then see what Sher has in mind for her.

My Fair Lady has a large cast but let’s deal with the major players. Starting at the bottom of the social scale is Alfred P. Doolittle, the common dustman as they say, Eliza’s dissolute father who would have higher moral standards if he could afford them.  He can’t until an American millionaire endows him with the curse of money and consequently middle class morality. His little bit of luck is over and he becomes concerned about getting to the church on time to commit the ultimate middle class crime: marriage. Alexander Gamignani is a hilarious scoundrel from start to finish.

At the other end of the social ladder is Mrs. Higgins who has real class. She knows her boorish son Henry well and takes Eliza’s side. Rosemary Harris, the grand lady of the theatre also represents a true lady of upper class English society at its best.

Colonel Pickering is another gentleman of the same class. Allan Corduner does fine work in the role even if he has to sing the awful “You did it.” 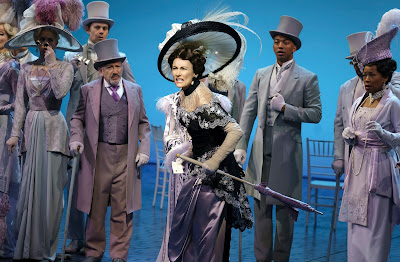 Laura Benanti, Christian Dante White, Allan Corduner. Photo: Joan Marcus
Sher uses of the huge stage of the Vivian Beaumont Theatre and the equally huge budget to great effect. The revolving stage brings us to the opening scene in Covent Garden with the columns of St. Pauls Church visible in the corner. We then get a glimpse of Wimpole Street before the gorgeous interior of Professor Higgins’ house is brought forward. We see the two story library and sitting room and when necessary a view of the upstairs bathtub and the outside. The race track, the ballroom of the embassy, the conservatory of Mrs. Higgins’ house and the rest of the scenes are brought forward with efficiency and aplomb. There are no short cuts in this production.

Michael Yeargan is responsible for the sets and Catherine Zuber gets full marks for the beautiful costumes.

James Karas is the Senior Editor - Culture of The Greek Press.  www.greekpress.ca