Have you seen Rope by Patrick Hamilton? You could have seen it in London, England in 1929 or in 2009. How about in Ottawa in 1950? You missed that too? Where is that time machine when you need it? You can see it at the Shaw Festival this year. And that is a roundabout way of pointing out how rarely Rope is produced and tipping my hat to the Shaw Festival for producing yet another rarity.

Rope is a whodunit but you know who committed the murder right from the opening scene and the only mystery is if the murderers will be discovered.

Wyndham Brandon (Kelly Wong) and Charles Granillo (Travis Seetoo) share a house in Mayfair, London. They are students at Oxford University and judging by their lodgings, their maid, their possession of a car and overall conduct, they are very well-heeled by any standard. But they do seem to have one small character defect. They want to commit an immaculate murder, a killing for the fun of it and make sure no one catches them. 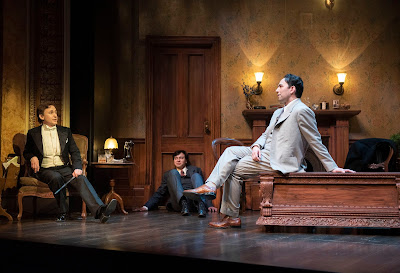 Michael Therriault as Rupert Cadell, Travis Seetoo as Charles Granillo
and Kelly Wong as Wyndham Brandon in Rope. Photo by Emily Cooper.
It gets worse. They invite their fellow undergraduate to their house and murder him by strangulation with a rope at 6:45 p.m. They place the body in a chest in the middle of their parlour and have planned a dinner party using the chest as a table. In the meantime they have invited the victim’s father, Sir Johnstone Kentley (Peter Millard) and his aunt Mrs. Debenham (Patty Jameson) to the dinner party together with three well-chosen friends to enjoy the perfection of criminality, the achievement of a perfect crime.

The friends are Kenneth Raglan (Kyle Golemba) and Leila Arden (Alexis Gordon), decent, ordinary upper class types. There is also Rupert Cadell (Michael Therriault) and you should pay attention to him. He is a brilliant poet, a thinker who may share Brandon’s morality about murder but without the stomach to achieve it.

All of the above summary comes out in the first few minutes of the play. From then on Brandon displays his braggadocio and his peerless achievement while the nervous Granillo drinks too much and runs the risk of spilling the beans or perhaps the bones about the contents of the chest on top of which the plates of food are arranged. Wong and Seetoo do fine work as criminals with a shared morality but very different temperaments.

Jameson as Mrs. Debenham has almost nothing to say and Golemba as Raglan and Gordon as Leila are very good as the decent guests who make Brandon proud of his achievement and wrack Granillo’s nerves now and then. 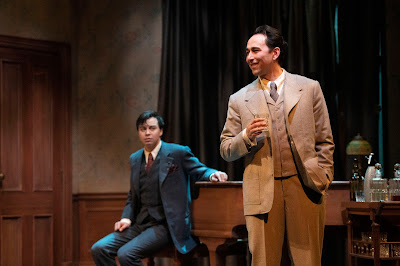 Travis Seetoo as Charles Granillo and Kelly Wong as Wyndham
Brandon in Rope. Photo by David Cooper.
Therriault as Cadell is suave, mysterious, penetrating and the person that is truly worth fooling about the murder. Will Brandon and Granillo succeed in committing a masterpiece of a murder? That is the question.

Director Jani Lauzon does good work in putting this old chestnut on the stage again. Rope respects the three unities of drama with complete fidelity. There is a single action that takes place in chronological order with no interruption and in one place and Lauzon keeps all the elements in perfect order. Joanna Yu has designed a well-appointed parlour for the young men without going overboard on the smallish stage of the Royal George Theatre. There is an upstairs from the parlour and we see the stairs when the characters leave the parlour.

Part of the enjoyment of Rope was seeing it at all and it is done well making it even more attractive. And you may even find out if one can commit a perfect crime.

And you don’t need a time machine!
___________
Rope by Patrick Hamilton will run in repertory until October 12, 2019 at the Royal George Theatre, Niagara-on-the-Lake, Ontario. www.shawfest.com.