NEXT TO NORMAL - REVIEW OF KITT & YORKEY MUSICAL AT CAA THEATRE

When or someone is described as “next to normal” you know perfectly well that he or she is probably a long way from the mental or emotional parameters that most people would describe as “normal.”

The title of Tom Kitt’s and Brian Yorkey’s musical Next to Normal politely understates the devastating effects of mental illness and the effect it has on an apparently normal family. Dan (Troy Adams) and Diana Goodman (Ma-Anne Dionisio) are a normal suburban couple with two teenage children, Gabe (Brandon Antonio) and Natalie (Stephanie Sy). Gabe is coming home well past his curfew and his mother reprimands him for it. Natalie plays the piano and there is a teenager named Henry (Nathan Carroll) who is clearly interested in her. 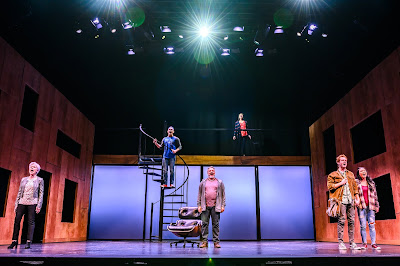 Louise Pitre, Brandon Antonio, Troy Adams, Ma-Anne Dionisio, Nathan Carroll
and Stephanie Sy. Photo by Dahlia Katz.
We quickly realize that nothing is normal in the Goodman family. A close look at the blank walls on each side of the stage and the spiral staircase in the centre, suggest that their world is different from “normal.” There are incongruities between what they say and what they do and the perfect family that Diana imagines is anything but perfect.

Dan sings disturbing songs like “who’s crazy” the husband or the wife? He loved a wife who was so alive when he was younger and now he would settle for one who can drive.

The dreadful fact is that Diana is suffering from a bipolar disorder which seems to be related to schizophrenia. She is suffering from memory loss and serious hallucinations especially about her son. When Henry is invited for dinner, Diana brings a birthday cake for her son who, we learn, died in childhood and the Gabe we see on stage is a figment of her hallucinations.

This is a musical that deals with one of the most tragic ailments that can strike a person and a family: mental illness.

We follow Diana as she makes numerous visits to Dr. Madden (Louise Pitre) a self-assured but humane psychiatrist or psycho-pharmacologist as she is referred to in the musical. Diana receives numerous drugs until she loses all feeling and flushes her pills down the toilet. 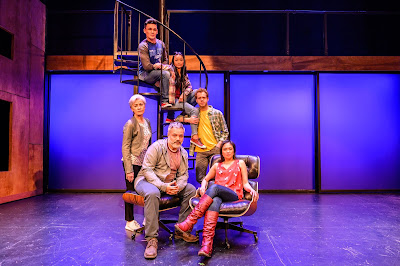 Brandon Antonio, Louise Pitre and Ma-Anne Dionisio
Photo by Dahlia Katz.
There is no cure for bipolar disorder and Diana agrees to undergo ECT or electro-convulsive therapy. The patient gets an electric shock which causes convulsions and disorientation. It looks like a hand grenade is thrown into your system and the hope is that the pieces will fall back in place in better order than they used to be.

There are serious consequences for all. Diana attempts suicide. Natalie and Dan undergo serious stress and Gabe is ever-present in Diana’s imagination. We witness a nightmarish and heart-wrenching situation that tears the family apart.

The characters are drawn carefully and lovingly. Dionisio as Diana is a sympathetic person going through the hell of an incurable disease and unimaginable drugs and treatments.

Adams as Dan is a decent man trying to help his wife while coping with his own depression. There is nothing but praise for the cast in this complex musical directed by Philip Akin. The unrealistic set and lighting are designed by Steve Lucas.

The brilliant scrip was awarded the 2010 Pulitzer Prize for Drama being one of the few times that a musical has been so recognized. The music won the Outer Critics Circle Award for outstanding new score.

Next to Normal  by Tom Kitt (music) and Brian Yorkey (book and lyrics), in a production by The Musical Stage Company,   continues until May 19, 2019 at the CAA Theatre, 651 Yonge St. , . www.mirvish.com