Beautiful Man, now playing at Factory Theatre, has three women sitting on stools or standing by them, while facing the audience and purportedly talking to each other. Behind them there is a room in which a young man is doing pushups at the beginning and participating in the performance intermittently for the first hour. He takes over in the last half hour. The women are played by Ashley Botting, Mayko Nguyen and Sofia Rodriguez. They speak at an impressive speed and very expressively. Well done acting jobs.

What are the three women talking about for an hour? First, we are warned about the use of explicit language and the f word is used for those who may not know what “explicit language means.” 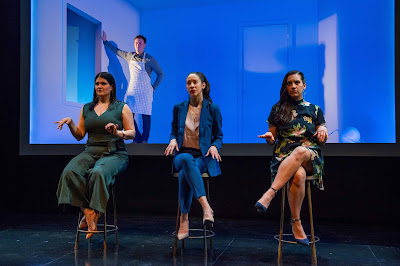 Ashley Botting, Jesse LaVercombe, Mayko Nguyen, Sofia Rodriguez.
Photo: Joseph Michael Photography
The women watch a cop show and they describe at great length what Detective Rosie does. She finds the body of a beautiful man in a basement, they tell us, and add details of his penis right down to how Rosie pushed it with her pencil. Rosie’s husband (Jesse LaVercombe, listed as the Beautiful Man in the program) is ridiculed for asking her “how was your day?” He may be a teacher or a nurse or something else but the women are more interested in penises, erections and sex. This can be construed as satire about bimbos who watch too much TV and have nothing better to do than to discuss in excruciating detail what they saw. It turns out they see mostly lurid sex and violence which easily qualifies for pornography.

Then they move to discussing a far more violent show involving fighting and we have a Queen Di who is struggling for power with her sister. Di wants a man for his sperm and she collects a few specimens to see if they qualify for her harem. She crushes the testicles of the unacceptable applicants and makes) someone suck the paste that she has made. We get much information about the torture, plenty of references to male organs and their various positions and goodness gracious all the explicit language we you can handle.

We move to Antonia and Cassia and more grotesque descriptions. Then to a brilliant woman who was a sommelier and now is a lawyer and meets this bozo of a man who wants to tell her about a pinot noir that they are drinking. He is a pretentious idiot.

She treats us to a description of life in a big law firm and what it takes to rise up the slippery pole to partnership. Satire, irony, burlesque, none of the above, make your choice and follow the plot.

After one hour of this and much more, the three women take their bow and step aside. Now it is the turn of the Beautiful Man to speak to us. Did I tell you that while the ladies were talking he slowly took off clothes until he was completely naked? He comes back fully dressed and speaks to us as if he were the woman lawyer walking home after the pinot noir showdown and being fearful of being attacked by some men who are standing at a street corner. We get a full description of her thoughts and fears for almost half an hour until the actor leaves the stage and we are left to wonder what happened to the brilliant lawyer and wine connoisseur. The would-be attackers are simply wondering what she is thinking about.

We are told that the play “turns the tables on gender and power with the simple question, “What if men were the victims of objectification and marginalization rather than women?”
Objectification and marginalization are almost antiseptic words which carry a clinical message without describing the horrors of the behaviour of numerous men that are in the news.  There are men who would not understand the meaning of those words and do far worse. There are also men who do understand those words and can’t get past their conduct.

Three or thirty men talking about women the way the three women in the play talk about men would not prove anything. I can see the political intent of the play but it simply failed to make me see the turning of the tables in the theatre.
__________
Beautiful Man by Erin Shields in a production by Factory Theatre runs until May 26, 2019 at the Factory Theatre, 125 Bathurst Street, Toronto, Ontario. www.factorytheatre.ca/