When you hear that Glenda Jackson is doing King Lear, you should start putting your boots on and head to the Cort Theatre in New York. You will not be disappointed.

In this modern dress production directed by Sam Gold, we have Glenda Jackson as an old and frail King Lear (she is a king and not a queen) with a furrowed face which at first blush may suggest that Goneril and Regan are right. The Authority that Kent discerns in Lear’s countenance is more in past remembrance of it than in present reality.

But as the play progresses, we see in Jackson a Lear with a deeply dramatic voice that she can modulate in her expression of fury, sorrow, humiliation and self-realization. She wears a formal suit in the opening scene and her voice is deep enough for us to accept her as a king. The result is a stupendous performance in a unique realization of King Lear.

The production opens on a formal occasion in a large gold-coloured state room. The men wear formal attire and the women wear gorgeous evening gowns. They are all sipping champagne while a string quartet is playing chamber music in the corner. This is not barbaric, old England. 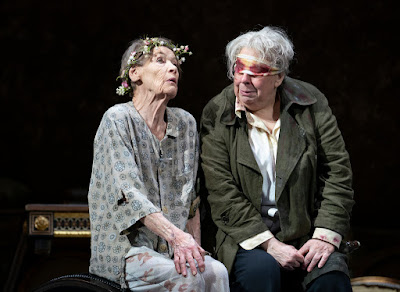 Glenda Jackson as King Lear and Jayne Houdyshell as Gloucester
The quartet will stay on stage during most of the performance and play frequently sometimes short snippets and longer pieces at other times. The music is composed by the eminent Philip Glass and he is listed on the programme above the director Sam Gold. The quartet emphasizes the aristocratic milieu and importance of the opening scene where the aging king divides the kingdom. I could not figure out what their presence meant for most of the rest of the performance.

At the beginning the beautifully dressed Goneril (Elizabeth Marvel) and Regan (Aisling O’Sullivan) appear quite polite if over-gushing and their evil side is revealed slowly but is quite sweeping in its viciousness. Cordelia (Ruth Wilson who also plays the Fool) stands her ground without being mousy. She is principled and honest.

The Duke of Cornwall is played by Russell Harvard who is deaf. He wears a Scottish kilt and is accompanied by a servant who communicates with him in sign language and verbalizes their exchanges for the audience. Bold casting by director Sam Gold and a fine performance by Harvard.

As with the evil sisters and Cornwall, Gold humanizes the characters. The evil Edmund (Pedro Pascal) is not exaggerated at all. He has a sense of humour and the evil in him is simply part of his nature. He enjoys his evilness and is shameless about it.
He is shown having rather graphic sex with Regan to confirm our suspicion about their relationship going well beyond a self-serving conspiracy. We know better anyway. Excellent work by actor and director. 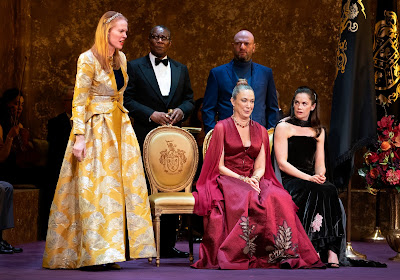 Aisling O’Sullivan as Regan, John Douglas Thompson as Kent, Matthew Maher as Oswald,
Ruth Wilson as Cordelia and Elizabeth Marvel as Goneril
The Fool is played by Ruth Wilson as a Chaplinesque figure who is genuinely funny and touching. Superb work in the interpretation of a role that can be funny more in the imagination of the audience than on stage.

The famous scene near the end of the play where Lear carries Cordelia onto the stage crying “howl, howl” is altered for obvious reasons. She is lowered from the ceiling with a rope around her neck. A truly dramatic solution to the problem of having Jackson carry Wilson on stage.

The Duke of Gloucester is played by a woman, Jayne Houdyshell, pretending to be a man. I do not doubt Houdyshell’s acting ability but I wonder what is gained by having a woman play the role of Gloucester. Is Gold, in one of his personal quirks, insisting that a woman as Lear must be balanced with a woman as Gloucester? Perhaps.

Gold at 41 is a young director carving out a career in classical and modern theatre. He gives us a personal view of the play that may have a few too many personal touches. So be it. One can argue with him on many points but this production of King Lear is unforgettable.
_____________
King Lear by William Shakespeare continues until July 7, 2019 at the Cort Theatre, 138 West 48th Street, New York. 212 239 6200

James Karas is the Senior Editor - Culture of The Greek Press. www.greekpress.ca/
Posted by James Karas at 11:58 PM