What if Romeo and Juliet… is a retelling of the story of the star-crossed lovers including the rhetorical questions asked in the title. The play is put on by Montreal’s Thêâtre DynamO at the Young People’s Theatre.

There are four actors who play multiple roles form Shakespeare’s play and we also hear Shakespeare’s voice played by Christopher Gaze. The story is told through acrobatics, dancing and spoken words but there is very little actual dialogue. 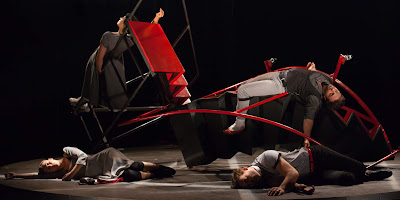 The cast of What if Romeo and Juliet... Photo: Guy Carl Dube
The play starts at the end of Romeo and Juliet when Romeo and Juliet and the other victims of the play are dead. They all revive to go to the ball at the beginning of the play where the lovers meet. They go through the balcony scene, fights and murder of Tybalt, Romeo’s banishment and the letter that never reaches him resulting in the death of both lovers.

The four actors who play the parts are highly athletic (three of them are in fact gymnasts) and the audience is treated to some very fancy acrobatics. Some of the scenes are in effect balletic and we get a very different rendition of the story. Romeo, Juliet, Tybalt and Benvolio are the main characters but the actors do represent some other entities.

The four actors/acrobats/dancers are Rosalie Dell’Aniello, Jéréie Earp, Agathe Foucault and Rémy Savard and they displayed talent and ability in the physical movements of the production. Creator Jackie Gosselin is very economical in the use of spoken words and most of them are directed towards the audience and there is very little interaction among the characters.

The set by Pierre-Étienne Locas consists of two ladders on wheels on a revolving stage. They provide for fluidity and motion. The colour red is emphasized but the lighting by designer Martin Sirois emphasizes dark tones almost throughout. The stage is almost never fully lit and watching the play for an hour in semi-darkness becomes ineffective. 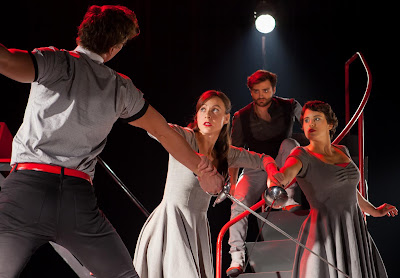 The cast of What if Romeo and Juliet... Photo: Guy Carl Dube

The What if part of the title is never activated. I think we have the right to see Romeo and Juliet making different decisions or choices and even giving the story a different ending. All we have is a voice at the end asking what would have happened if the lovers had made different choices. Well, why don’t you give us your opinion?

I find audience reaction to YPT production interesting and at times highly enjoyable. For the 10:30 a.m. opening the centre section of the theatre was full of students and I felt that the reaction was muted and the applause at the end more polite than enthusiastic. I think they are the best judges of productions that are aimed at stimulating and entertaining them and the verdict on What if Romeo and Juliet… despite some fine features and display of talent must be less than enthusiastic.
___________
What if Romeo and Juliet… created by Jackie Gosselin based on William Shakespeare’s Romeo and Juliet opened on October 10 and continues until October 19, 2018 at the Young People’s Theatre, 165 Front Street East, Toronto, Ontario. 416 862-2222. www.youngpeoplestheatre.ca
Posted by James Karas at 11:53 PM