The world premiere of a new opera? Reach for the trumpet and start blowing.

A new opera by a Canadian librettist and a Canadian-American composer? Get the entire brass section to announce the news.

Commissioned by the Canadian Opera company? Get the whole orchestra to play The Triumphal March fortissimo. This is too good to miss or be quiet about.

Composer Rufus Wainwright and librettist Daniel MacIvor have chosen the story of the Roman Emperor Hadrian who ruled, in the words of Edward Gibbon, during the “happy period” of the Roman Empire when it “comprehended the fairest part of the earth, and the most civilised portion of mankind.”

The COC commendably and sensibly has recruited a largely Canadian cast and artistic team without ignoring more internationally known artists such as Thomas Hampson, Karita Mattila and Ben Heppner (our own, yanked out of retirement). 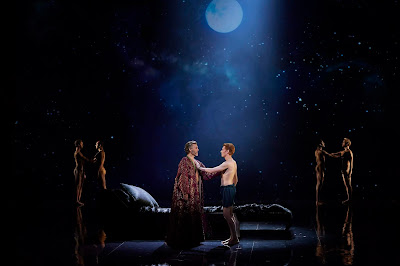 Thomas Hampson as Hadrian and Isaiah Bell as Antinous.
Photo: Michael Cooper
The effort gets a standing ovation but the result gets polite applause for some of its aspects. The biggest problem I think is the libretto. MacIvor is too ambitious by a half and in his attempts to encompass a large number of topics he sows confusion and a certain amount of ennui.

MacIvor tells us that Hadrian is about the last day of the emperor’s life and he seems to take three hours (including intermission) to die. Wainwright tells us that the opera “is a surreal romp through time and space, mixing true occurrences with complete fabrication in order to illustrate a vivid ‘creative snap shot’ of the classical era.”

The interesting part of Hadrian’s life that seems to have drawn both Mac Ivor and Wainwright is his homosexual involvement with a young Greek named Antinous over a period of six years. But MacIvor goes after many other themes and in other dimensions.

I can only give a short description of what happens. Hadrian is on his deathbed grieving over his lover Antinous who drowned in the Nile a year ago under mysterious circumstances. But within a few minutes of the opening of the opera, Hadrian is visited by the ghosts of the Emperor Trajan (his predecessor) and his wife the Empress Plotina. The latter offers Hadrian two nights with Antinous and “the truth” about his death, if he will sign a document that will guarantee her eternal survival. She is already a deity but those monotheistic Nazarenes and Jews of Judea seem to pose a real threat.
Plotina now takes us back to the good times of seven years earlier when Hadrian met Antinous. I have no idea what world we are in or in whose imagination we are. A Sybil (I won’t tell you who she is) predicts that Antinous will sacrifice and become a saviour. I have no idea if this is something that Plotina makes Hadrian imagine or something he actually saw when he met Antinous or something that she invents for whatever reason, perhaps immortality.

Six years later, in some undefined world on the Nile, Hadrian and Antinous make love. Hadrian asks Plotina to change the rules – presumably of the imaginary visit with Antinous on the night of the latter’s death and she refuses. We are aware that Hadrian is deathly ill and since this is supposed to be surreal, sense and logic go out the window.

Hadrian goes in and out of this world; a Sybil appears again and tells Hadrian that he can be cured if there is a sacrifice. A sacrifice is ready but the Sybil admits that she is a fraud.

Hadrian, on one of his visits to this world, signs a decree ending Judea and monotheism and making Plotina happy because she will live forever. As I said, she is already a deity and I am not sure what living forever means.

MacIvor and Wainwright embrace enough subjects to make you think you are watching CNN for far too long. The clash between the polytheistic Roman religion and the encroaching monotheistic religion of the Jews and the Christians. The end of Judea and the birth of Palestine. If I heard correctly, the genocide of the Jews by Hadrian, the survival of the Roman Empire. The coming of a saviour. 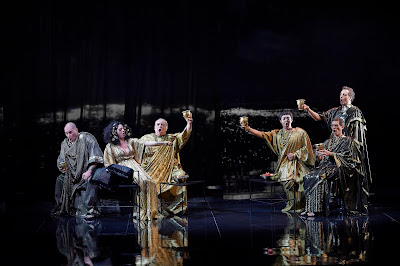 A scene from the C0C’s world premiere production of Hadrian, 2018.
Photo: Michael Cooper
Wainwright’s music with its long phrases goes a long way in relieving the tortuous plot but it cannot save it. Baritone Thomas Hampson does a marvelous job as he intones his lover’s name and makes fine use of his sonorous voice in life and death. Soprano Karita Mattila is an impressive Plotina as is Roger Honeywell as Trajan. Tenor Isaiah Bell is a sympathetic lover with a fine voice when he is allowed to be but once we know that he and Hadrian are homoerotic lovers we don’t need that much illustration of their love-making.


The most successful and impressive aspects of the production are the sets by Michael Gianfranceso, the lighting designs by Bonnie Beecher and the projection designs by Laurie-Shawn Borzovoy. The opening scene is dominated by the projection of an oversize statue of Hadrian and a large sarcophagus. We have a night sky with a moon later that looks stunning and a view of the flowing Nile. The scenes are simply stunning.

Peter Hinton, a man of the theatre, directs a staging with high production values. Johannes Debus conducted the Canadian Opera Company Orchestra in a production that deserves to be announced and celebrated with the Triumphal March but perhaps with a bit less fortissimo that we would have liked.
___________
Hadrian by Rufus Wainwright (music) and Daniel MacIvor (libretto) is being performed seven times between October 13 and 27, 2018 at the Four Seasons Centre for the Performing Arts, 145 Queen Street West, Toronto, Ontario.  www.coc.ca