The Canadian Opera Company has launched its 2018-2019 season with a production of Tchaikovsky’s Eugene Onegin to be followed by Hadrian, a world premiere of a new opera by Rufus Wainwright. This production of Eugene Onegin was directed by Robert Carsen for New York’s Metropolitan Opera and premiered at Lincoln Centre in 1997. The COC has borrowed all scenery and costumes from the Met.

Tchaikovsky’s lush score requires a baritone (for Onegin), a soprano, (for the lovely, romantic Tatyana) a tenor (for the poet Lensky) and a mezzo-soprano (for Tatyana’s sister Olga). I am not denigrating the secondary characters at all and listen to them with pleasure. The COC is quite well equipped for all the roles and what’s more, they are mostly Canadians. 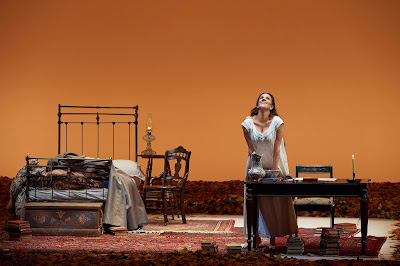 Joyce El-Khoury as Tatyana. Photo: Michael Cooper
Robert Carsen (he is from Toronto) is one of the best opera directors in the world and has done brilliant work using minimalist sets. I think this production of Eugene Onegin would rank as one of his less successful efforts.

During the overture, we see a man on the empty stage seated in a chair reading. We assume it is Onegin and it is an appropriate image of the loner and perhaps eccentric “hero” of the opera.

The opera opens on a Russian country estate where the peasants sing some pleasant songs. It is harvest time and Carsen and set designer Michael Levine use fallen leaves and orange walls to suggest the season. Aside from a table and a couple of stools there is nothing else on the stage. Except for indicating the season, the set does not communicate anything about time, place or atmosphere.

The famous Letter Scene where Tatyana spends most of the night composing a letter to the haughty Onegin is likewise done on a bed with no other furniture and again it looks pretty barren and the moon does not help.

For the ball scene in Act II a part of the stage is enclosed with chairs and the well-dressed guests try or pretend to waltz. The space is tight and most of the guests either do not know how to waltz or there is not enough room for any twirling.

For the dawn duel between Lensky and Onegin, we see only silhouettes of the men in the morning fog which may be acceptable but not really necessary.

We have much better luck with the singers. Soprano Joyce El-Koury has a lovely, supple voice and exudes youth and innocence as the teenager who falls in love with an older man who is not interested in her or perhaps any other woman.

Bass-baritone Gordon Bintner has an impressive voice and physique but he sang under the disability of a cold. There were times when he did not have the vocal power to dazzle us and no doubt it was because of the cold. 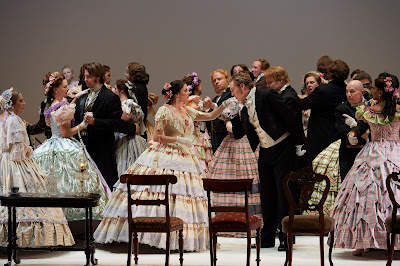 (centre) Joyce El-Khoury as Tatyana and Gordon Bintner as Eugene Onegin.
Photo: Michael Cooper
Tenor Joseph Kaiser sang a moving and finely-toned Lensky. He sings tenderly of his lost youth, of his love for Olga and the possibility of his death in the duel with his friend Onegin.

Mezzo-soprano Varduhi Abrahamyan has marvelous voice that can be described metaphorically as plush dark velvet or delicious dark chocolate especially in her lower register (and damn the mixed metaphors). She sang the role of Olga and I hope I did not understate my delight in hearing her.

A final note about the direction. Several years pass between the duel and the next scene in the opera which takes place in a palace in St. Petersburg. While the orchestra plays the polonaise that opens Act III, half a dozen servants fuss over and put together Onegin. This is right after the duel with no pause to indicate the passage of time or the change of scene. Onegin’s first words after the polonaise is that he is bored.

Johannes Debus conducted the Canadian Opera Company Orchestra in a production that has far more plusses than reasons for grouchiness and was received quite heartily by the audience.
___________
Eugene Onegin by Pyotr Ilyich Tchaikovsky is being performed eight times between September 30 and November 3, 2018 at the Four Seasons Centre for the Performing Arts, 145 Queen Street West, Toronto, Ontario. Tel:  416-363-6671. www.coc.ca