Pierre de Marivaux is not exactly a frequent visitor to Toronto and environs. Oh, the Stratford Festival and Canadian Stage have tipped their hats to him but you have to have a long memory or be of a certain age to claim a tête-à-tête with his plays.

Except for Théâtre français de Toronto which is not only staging a play by Marivaux but one of his lesser known works at that. They are doing it in French, of course, but with English surtitles – after all Canada is a bilingual country, n’est-ce pas?

La Seconde Surprise de L’Amour is about a young, rich, beautiful Marquise (Karine Ricard) whose husband died a mere month after they were married. The Marquise is disconsolate (to put it at its lowest form of misery), wants nothing to do with men and has decided to spend the rest of her life sighing for her late love. (More superlatives, please). 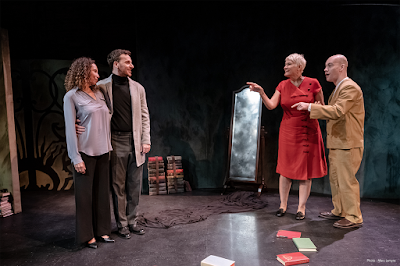 Karine Ricard (Marquise), Nabil Traboulsi (Chevalier), Patricia Marceau (Lisette),
Nicolas Van Burek (Lubin). Photo: Marc Lemyre
Enter the Chevalier (Nabil Traboulsi) who “lost” his love Angélique and has given up women because his love for her will die only with his death. You have guessed that these two are kindred spirits, have you not?

Lisette (Patricia Marceau), the Marquise’s wily maid, wants to marry Lubin (Nicolas van Burek), the Chevalier’s valet. But there is a Count (Manuel Verreydt) who is also interested in the Marquise’s hand and a pedantic scholar named Hortensius (Pierre Simpson) who will keep the plot humming for a couple of hours. If you have not guessed the outcome of the play within a few minutes, you should give up going to the theater and take up quilting.

Director Joël Beddows gives us a straightforward reading of the text done in ordinary modern dress. There are a few hearty laughs but a number of other things are missing. Some plays travel across the centuries much better than others but I think La Seconde Surprise loses a lot when presented as a modern play. The class difference between the aristocrats and the servants almost disappears. The Marquise is a distraught woman but she should also show hauteur and stylized behaviour and acting becoming people who are above hoi polloi.

The Marquise, the Chevalier and the Count should speak and behave differently from the servants and the difference should be palpable. Here there is almost no difference in dress, accent or behaviour. It is legitimate to put old wine in new bottles provided that it does not lose its taste. In this case I think it does. 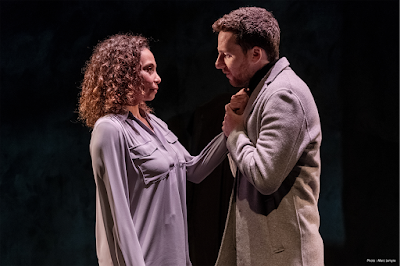 Karine Ricard (Marquise), Nabil Traboulsi (Chevalier). Photo: Marc Lemyre
The play is performed at the Berkeley Street Theatre Upstairs. The playing area is very narrow but wide. Beddows has decided to make full use of the width of the stage at times by having the actors speak to each other from the opposite sides of the playing area. I think having them face off near the center is preferable.

Melanie McNeill’s set consists of painted panels that do not indicate time and place. It is a modern setting and we do not expect the accoutrements of a palatial Paris residence but in keeping with the general approach of the production, this does not help.

The cast seemed more than competent to handle any style of production. I quite realize that I am complaining about not getting the production I would have wished but at the same time I think what we got was a good production but it hardly did justice to Marivaux.
______

La Seconde Surprise de L’Amour by Marivaux will run until October 28, 2018 at the Berkeley/Upstairs Theatre, 26 Berkeley St.  , Ont. www.theatrefrancais.com
Posted by James Karas at 10:41 AM