THE NETHER – REVIEW OF STUDIO 180/COAL MINE THEATRE CO-PRODUCTION

Haley’s play The Nether, now playing at the Coal Mine Theatre, is about an ugly world of child pornography that has become a new dimension of existence. It is sexual contact with children in the Nether world where you can do the most repugnant things with children without any consequences. 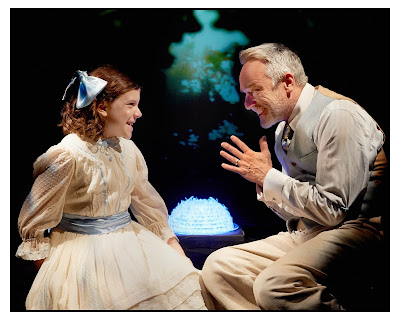 Hannah Levinson and David Storch. Photo: Tim Leyes
A businessman named Sims has created the Hideaway, a place of beauty in the Nether, where men visit and meet a pretty nine-year old named Iris and have fun. According to Sims, the Hideaway is nothing but a world of images and having sex with a child or an elf is nothing but images and there are no consequences for doing that or worse.

Detective Morris (Katherine Cullen), who lives in the real world, has set out to find information about Sims and the Hideaway and shut it down. But the Hideaway is in the world of high tech and information is hard to come by and finding where the physical server is located is almost impossible.

The play is structured around Morris interrogating three men – Sims (David Storch), Doyle (Robert Persichini) and Woodnut (Mark McGrinder) who is a special case. The interrogations take place in a dark, forbidding room with Morris playing the tough cop.

The interrogations alternate with scenes in the Hideaway, a pleasant room, a fireplace, views of trees at the back – simply idyllic surroundings. Sims is called Papa, a loveable, well-dressed man who is somewhat severe but he is loved by all. You hear of a spanking room, of favourites and you know that this is a place for paedophilia but it is virtual paedophilia. The problem is the eternal one of image versus reality. Virtual paedophilia encroaches on real child abuse and reality begins to lose its moorings. 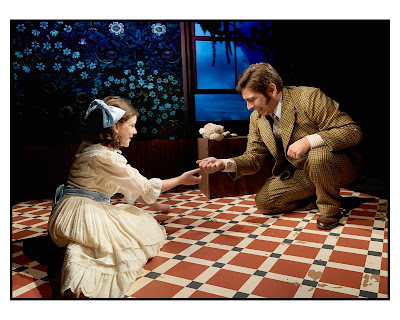 Hannah Levinson and Mark McGrinder. Photo: Tim Leyes
That is the issue that Haley raises in this outstanding and fascinating play.

Hannah Levinson exudes all the innocence and beauty of a nine-year old that would attract a paedophile in real life or as a high tech virtual creation. Storch and Persichini are paedophiles who know they are paedophiles and the real world may not know what to do with them or be able to even catch them.

Peter Pasyk does exceptional work in directing the fine cast in a play that pushes the boundaries between virtual and actual reality leaving you astonished. This is truly outstanding theatre.
______
The Nether by Jennifer Haley, in a production by Coal Mine Theatre and Studio 180 Theatre, opened on October 11 and will continues until October 8, 2017 at the Coal Mine Theatre, 1454 Danforth Ave. Toronto, M4J 1N4. www.coalminetheatre.com