AIDA – REVIEW OF LIVE FROM THE MET BROADCAST

The Triumphal March from Aida is probably the defining image of opera for many people. There are productions that give the impression that the local zoo was raided for large animals to march across the stage as the heroic Radames returns from the war with the captured Ethiopians and their king in tow. Verdi’s thrilling music, the Metropolitan Opera Chorus, the large number of extras and the imposing set provide an electrifying scene that is simply overwhelming. And yes there are horses for good measure but no other animals such as elephants and giraffes.

Sonja Frisell’s production with Gianni Quaranta’s monumental sets premiered in 1988 and   has held its place in the Met’s repertoire ever since with numerous cast changes. The attention this time was directed on Anna Netrebko who is singing her first Aida. She has the magical combination of vocal and star power to rivet attention on herself and she does not fail.

A scene from Act 2 of Verdi’s "Aida" Photo: Marty Sohl/Met Opera
Listen to her first act great aria, “Ritorna vincitor!” for a bravura performance. She wants Radames, her lover and commander of the Egyptian forces, to defeat the Ethiopians and her father King Amonasro. It is a passionate and wrenching aria that requires vocal heights and emotional breadth and Netrebko delivers on all accounts.

“O patria mia” is another demanding aria in which fear, nostalgia, longing pain for the loss of her home and a desire for death as the only escape are mixed as Aida considers her future. She is a captive Ethiopian princess who must choose between love of country and love of a man, an Egyptian hero no less, with her father the King of Ethiopia thrown in for good measure. Netrebko captures all of the emotional turmoil passion and vocal splendour.

Aida’s competition for the love of Radames is the Egyptian princess Amneris, the daughter of the King. In this production Georgian mezzo soprano Anita Rachvelishvili provides a balance if not competition for Netrebko.  She has a splendid mezzo voice that can produce a wonderful dark notes and emotional range as a woman torn with love, jealousy, anger and in the end rejection.

Tenor Aleksandrs Antonenko is an outstanding singer who does a much better job as a military leader than as an emotional lover. With Netrebko and Rachvelishvili as his opposites, he tends to get buried but he deserves full credit for his performance in the Act II duet.

Quinn Kelsey sings the role of King Amonasro who is captured by the Egyptians and has the tough job of convincing his daughter to convince her lover Radames to betray his gods and his country. Kelsey pulls on all the motional heartstrings and succeeds in a fine performance. 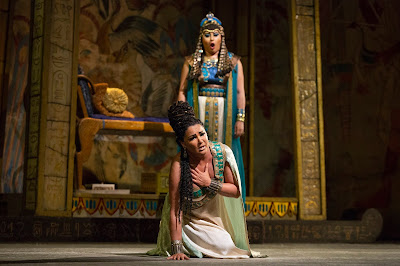 Anna Netrebko as Aida and Anita Rachvelishvili as Amneris in Verdi's "Aida."
Photo: Marty Sohl / Met Opera
On the huge Lincoln Centre Stage, the massive Egyptian sculptures, the lifts that can move sets around and the army of people created by the chorus and the extras give the impression that this is not a live performance in a theatre but a scene from, say, Cecil, B. DeMille’s The Ten Commandments. You almost expect the Red Sea to part.

Aida is the first opera to be broadcast from Lincoln Centre for the 13th season of Live in HD from the Met. For people who are unlikely to go to New York or have no opera available within reachable distance or cannot afford the price of a ticket anywhere, Live from the Met provides a great solution. You get to see ten operas every year at a sensible price from one of the world’s great opera companies.
____________


Aida by Giuseppe Verdi was shown Live in HD at select Cineplex theatres across Canada on October 6, 2018 and can be seen again on November 3, 5, 7 and 11, 2018. For more information go to: www.cineplex.com/events