THE DYBBUK - REVIEW OF GESHER THEATRE PRODUCTION OF NEW VERSION

How about a play performed in Hebrew with English and Russian surtitles put on by an Israeli theatre company that was founded by actors from Russia? Welcome to a new version of The Dybbuk in its North American premiere produced by Gesher Theatre at the elegant Elgin Theatre. If you did not make it to the Elgin Theatre on Saturday and Sunday, you are out of luck.

S. Ansky wrote The Dybbuk in 1914 in Russian and subsequently translated it into Yiddish and the play was later translated into Hebrew. It has gained iconic status in the theatrical pantheon which means it is manna for translators and adapters. The current version is written Roy Chen, “inspired by S. Ansky, according to program, a playwright and translator who is credited with translating some 40 plays into Hebrew. 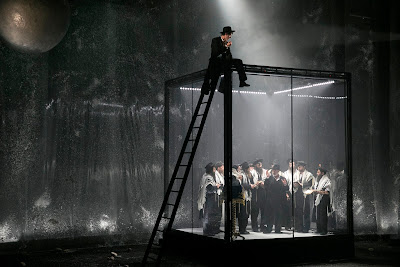 Israel Demidov as Khanan on top of the synagogue roof. Photo: Daniel Kaminski
The Dybbuk has a fascinating plot about small Jewish community in the nineteenth century where a young woman is possessed by an evil spirit, a dybbuk.

The play opens Fiddler-on-the-Roof style with a young man called Khanan sitting on the roof of the synagogue telling God that he is in love with Leah. Khanan is passionate and determined but he is described as a gimp. Whatever the precise meaning of that word, it is derogatory and in the opinion of Leah’s father Sender, he may be described as a loser. Sender wants Leah to marry the more sociably acceptable Menashe. Khanan joins the dead.

We observe Jewish rituals and traditions surrounding a wedding but before the marriage ceremony can be concluded, Leah is possessed by Khanan’s spirit. The Dybbuk is subtitled Between Two Worlds and indeed we go to the Underworld where Khanan joins the ghost of Hanna, Leah’s mother and other people from village.

Leah’s grandmother Frieda tries to exorcise the spirit that possesses her granddaughter and Menashe insists on marrying her. 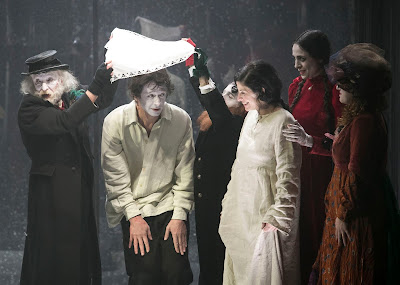 Director Yevgeny Arye with Set Designer Simon Pastukh and Lighting Designer Igor Kapustin stage the play in a dark, foreboding, smoke-filled and ghostly atmosphere. Much of the action takes place in a small glass cubicle while other scenes are in the gloomy and bone-chilling cemetery. There is some humour in the play especially as Frieda attempts to find some formula or recipe to expel the dybbuk but aside from that this is the murky world of the twilight zone.

Efrat Ben-Tzur plays the unfortunate Leah and she dominates the play. Leah is the product of a patriarchal society where she must obey her father and she is a woman in love who becomes possessed by her lover’s spirit. The latter is almost a mad scene reminiscent of Renaissance drama. These scenes place high demands on the actor and Ben-Tzur fulfills them with exemplary talent.

Israel (Sasha) Demidov as Khanan goes from the hapless gimp to a ghostly spirit in the underworld, all passion and determination against insurmountable odds. A dramatic performance.

Doron Tavori as Sender is the classic patriarch, controlling, demanding, unbending. In that tradition and in that world he cannot be anything else and Tavori is thoroughly convincing.

Fira Kanter turns in a fine performance as the sympathetic grandmother who tries what she can to free Leah from her demon.

There is a fiddler and there is a roof in The Dybbuk but there is no Tevye to sing “If I were a rich man” or “Do you love me?” But there is an absorbing and highly dramatic play featuring superb performances and fine-tuned directing and providing a fascinating afternoon at the theatre.
____________

The Dybbuk by Roy Chen, inspired by S. Ansky was performed on September 29 and 30, 2018 in a production by Gesher Theatre at the Elgin Theatre 189 Queen Street, Toronto, Ont. www.ShowOneProductions.ca