THE CHILDREN – REVIEW OF CANADIAN STAGE PRODUCTION OF KIRKWOOD’S PLAY

The Children may well be described as a domestic drama dealing with the eternal triangle. Robin (George Johnson) and Hazel (Laurie Paton) are a middle-aged couple living in a cottage by the sea in a remote area. They are visited by their old friend Rose (Fiona Reid) and share memories including a romantic relationship between Robin and Rose. There is still some sexual electricity between them but the wires are seriously frayed.

A domestic drama? Playwright Lucy Kirkwood slowly and meticulously reveals the main subject of the play as she interweaves facts about the outside world amid the memories of the past of the three characters. The subject could not be more terrible. 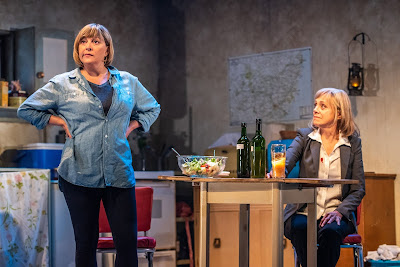 Laurie Paton and Fiona Reid. Photo: Dahlia Katz
When Rose arrives at the cottage, she has a nose-bleed. The cottage is situated just outside the exclusion zone and there is a nearby nuclear power plant. There is limited electrical power and there is radioactive contamination all around them Rose and Robin keep a dairy farm inside the exclusion zone but he goes there every day to “milk” the cows for some reason. I won’t tell you why.

There is much talk about children in The Children but there are no children.

Oh, yes, the three people in the cottage are physicists who had a hand in the design of the nearby nuclear power plant that imploded causing a massive earthquake and a tsunami. There are young scientists trying to repair the plant and stop the radioactive poison that is still seeping out causing unimaginable diseases.

Rose has not arrived at the cottage to reawaken a romance with Robin. She wants to disturb life in “the happy cottage” by inviting the couple to join her at the power plant.  I will not reveal more lest I spoil some dramatic moments.

Kirkwood’s interweaving the personal lives of the three people with the unimaginable catastrophe just outside the cottage is simply masterly. The old and current relationships of the couple and Rose keeps our attention as the real story unfolds before us of a world at its end. 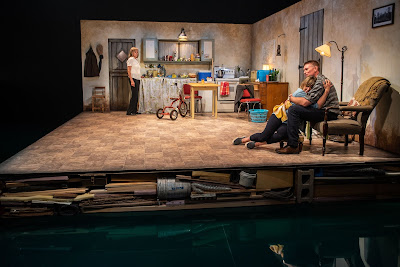 Johnson, Paton and Reid, under the expert direction of Eda Holmes, give superb performances. They hide as much as they reveal and at the same time subtly disclose much more than we suspect. But all is done gradually and judiciously and, at times, almost imperceptibly.

Hazel describes her first impression of the oncoming disaster: eggs shaking and a rising tide, but nothing to worry about. That is how the play and this marvelous production struck me. But then she realized that the eggs shaking was the result of an earthquake and the rising tide was destructive tsunami. We also realize that this is no domestic drama.

The set by Eo Sharp represents the kitchen and sitting room of a simple cottage somewhere on the English coast. As with everything about the play, it is the undercurrents that count.

A superb production of an outstanding play.
_______
The Children by Lucy Kirkwood in a Canadian Stage and Centaur Theatre co-production continues until October 21, 2018 at the Berkeley Street Theatre, 26 Berkeley Street, Toronto, Ontario. www.canadianstage.com  416 368 3110