Ain’t Too Proud – The Life and Times of THE TEMPTATIONS is the quintessential entertainment extravaganza.

It is tells the story of one of the most talented and successful groups who sold millions of records and left their mark on American R&B music. That tells us nothing about the thrilling show created by the artistic team.

The show is a concert of songs performed by The Temptations with actors representing the original five and a number of changes that occurred over the years. The Temptations did not so much sing as release vocal, bopping, hopping and physical energy of outrageous proportions.  And that’s just the beginning. 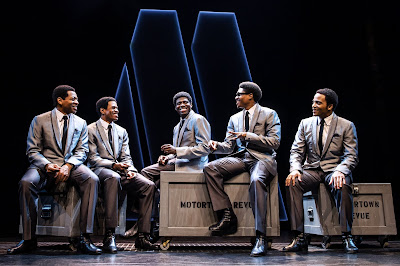 Ephraim Sykes,  Jawan M. Jackson, Jeremy Pope, Derrick Baskin &
James Harkness in AIN’T TOO PROUD. Photo by Matthew Murphy
The story of the formation of the group in Detroit in the early 1960’s and its subsequent rise can be long and complex but writer Dominique Morisseau has gleaned incidents and stories from the lives of the men (from Otis Williams’ book The Temptations) that range from the humorous, to the tragic, from the infighting among the group, to drugs, drinking, infidelity, to the toll taken by age, and generally to the “heart-ache and the thousand natural shocks that flesh is heir to” as Hamlet put it. That is a good step in the right direction but not enough to create a grand show.

The creators have raided The Legendary Motown Catalogue for music and songs from the era and that is a great step forward. For many in the audience songs from the ‘60’s and 70’s are trips down memory lane but for many more they are borrowed memories that are just  as keenly felt and enjoyed given the exuberant performances.

There are other components that bring the whole package together.

Howard Binkley’s lighting design and Peter Nigrini’s projection designs provide an almost continuous sense of motion. Projected images are seen at the back of the stage and on the sides of the theatre and there are a few pauses but the idea of never letting the audience alone for more than a few minutes is maintained.

This is very much and ensemble effort that many parts come together to create the show, if we must award an olive wreath it must go to director Des McAnuff. The show glitters from the start and the performers have the audience in the palm of their hands but there is also a buildup to more frenzied showmanship and audience involvement and finally a denouement where we get the disintegration and death from old age or suicide or even more tragically from an industrial accident. 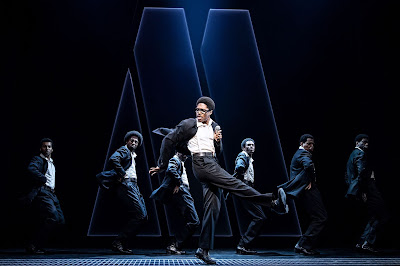 Christian Thompson, Saint Aubyn, Ephraim Sykes, Jeremy Pope, Derrick Baskin,
Jawan M. Jackson and James Harkness. Photo by Matthew Murphy
The behind-the-scenes creators of Ain’t Too Proud need a large, talented, disciplined and energized cast to bring the show to life. Singing, dancing, comic scenes, dramatic scenes are all de rigueur in a show like this and they are all delivered to an appreciative audience.

Candice Marie Woods plays Dianna Ross and performs with supreme energy with the Supremes and there is a large ensemble to light up and fill the stage when necessary.

Did I say this is an entertainment extravaganza? You can see it here or go to Broadway next year or wait for a road show return some time in the future. But that’s entering into the field of prophecy and I bow out.
____________
AIN’T TO PROUD: The Life and Times of THE TEMPTATIONS by Dominique Morisseau (book based on The Temptations by Otis William)), The Legendary Motown Catalogue (music and lyrics), runs until November 17, 2018 at the Princess of Wales Theatre, 300 King St. West, , . www.mirvish.com