THE MEN IN WHITE – REVIEW OF FACTORY THEATRE PRODUCTION

The Men in White is a gem of a play that gets a terrific production at Factory Theatre.

It deals with the gamut of issues that face immigrants to Canada but that is only a small part of what the play offers. It is funny, moving and intelligent with a fine plot and well-developed characters. And at the end it delivers a punch that stuns you.

The title is ironic. The men in white may wear white but they are not white at all. They are mostly immigrants from India who play cricket in Vancouver. That is one half of the play. The other half takes place in a predominantly Muslim neighborhood of Mumbai (Bombay), India in a chicken slaughterhouse. 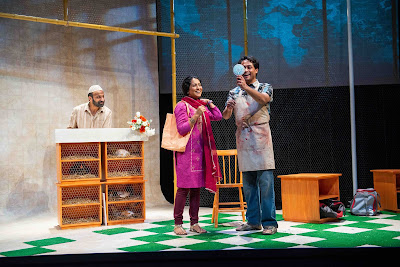 Hasan’s brother Abdul is an illegal immigrant to Canada and wants him to join the cricket team which is not doing very well. How do you bring a young Muslim, an unknown cricket players with no money to Canada?

The interaction among the three characters in India are charming, hilarious and moving. Mukherjee turns in the best performance as the awkward and nervous suitor for Haseena.  Mukherjee modulates his voice, has hilarious body language right down to using his hands to emphasize his clumsiness, utter awkwardness in dealing with Haseena and Baba, and makes a loveable young man.

Vejdani as Haseena is bright, ambitious, pretty and a highly attractive person who must compromise her principles in a corrupt society. Author Anosh Irani pulls no punches about dishonesty in India.

The immigrants who make up the cricket team in Vancouver provide some fascinating and recognizable types. Abdul (Gugun Deep Singh) works in a restaurant and lives in a room at the back of it, in constant fear of being caught. Canada is not the Promised Land for him. At the other end of the immigrant spectrum is Doc (Cyrus Faird), a well-off Zoroastrian surgeon who hates Muslims and considers himself “Canadian.” In other words he has become or wants to be considered white despite the colour of his skin. His hatred of Muslims is based on the fact that his son was killed by Hindus during a riot because they thought his son was Muslim.

Randy (Sugith Verughese), the captain of the team, tries to maintain order and inspire the team to play well and hopes that Hasan will come and improve their performance. He has a Chinese player named Sam (John Chou) who is pretty useless and Ram (Farid Yazdani), a banker and finer cricket player. 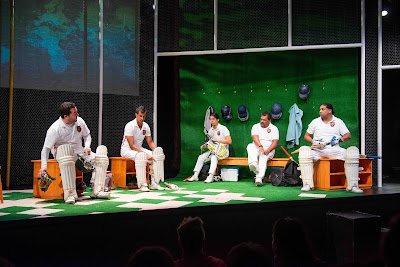 Irani looks at immigration to Canada from those that desperately want to get a visa form a corrupt country, to immigrants who have indeed found the Promised Land and to those who are here struggling to survive. But money and success do not change one’s colour and the rest is reality in Canada.

The set and lighting design by Steve Lucas is quite simple. On one side of the stage there is a cabinet with chickens representing the slaughterhouse. On the other half of the stage, there is the locker room where all the action involving the cricket team takes place.

Plays by and about immigrants done almost entirely by immigrants used to be about as frequent as total eclipses of the sun but the situation is changing. Ethnic groups that have tens and even hundreds of thousands of immigrants are starting to be heard from.

Check the name and skin colour of the creative team and the people on stage next time you go to the theatre. Start with the Artistic Directors of the Stratford Festival, Factory Theatre and Canadian Stage. Now look for plays written by immigrants or their offspring. The stage is changing, thank goodness.
__________

The Men in White by Anosh Irani, directed by Philip Akin, runs until November 4, 2018 at the Factory Theatre, 125 Bathurst Street, Toronto, Ontario. www.factorytheatre.ca/