THE ROYALE – REVIEW OF SOULPEPPER PRODUCTION OF RAMIREZ’S PLAY

The Royale, Marco Ramirez’s play, is inspired by the life of boxer Jack Johnson. In racist America of the early twentieth century, Johnson became the first black Heavyweight Champion. Racist Americans searched for “a great white hope” to defeat Johnson and the best they could do was Jim Jeffries, an undefeated Heavyweight Champion, who came out of retirement to fight Jackson and was defeated.

That may be have been his inspiration, but Ramirez does not write a play about a black boxer who becomes Heavyweight Champion in Jim Crow’s America. 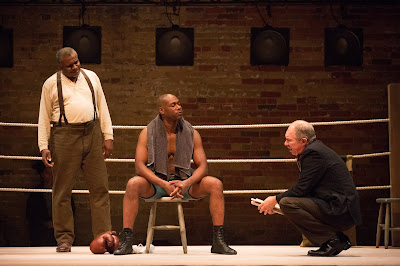 Alexander Thomas, Dion Johnstone, and Diego Matamoros. Photo: Cylla von Tiedemann.
The play opens in a boxing rink with Jay (as Ramirez calls him) Johnson (played impressively by Dion Johnstone) about to fight a boxer called Fish (Christef Desir). The referee Max (Diego Matamoros) introduces the fighters and the match begins but there are no punches thrown. The two men shadow box while facing the audience and they address us or each other. We hear their thoughts. They speak in short, staccato phrases that are punctuated by rhythmic stomping of feet. The referee and Jack’s trainer Wynton (Alexander Thomas) also throw in brief comments (their thoughts, really) about the fight.

Wynton gives some brief instructions to Jack in the same style as the comments made by all the characters, brief, quick, almost stream-of-consciousness.

Jay wins and Wynton and Max as a fight promoter have a conversation about boxing, about arranging other matches, about the past, the future and other subjects. They speak frequently in two and three word sentences. We are told that Max has found a challenger who wants ninety percent of the purse, win or lose.

The same style of speaking continues during a press conference where Max, Jay and Wynton are present. The play has only five characters but the clapping, foot stomping and flashing lights give the impression of many more people. The short phrases and the longer speeches are poetic in structure rather than straightforward prose.

Jackson finally gets a chance to fight for the championship and all the issues of a black man fighting a white boxer in utterly racist America come to the fore. Racism is pervasive throughout the play implicitly and explicitly but the arrival of Jackson’s older sister Nina (Sabryn Rock) adds another dimension.

She knows her brother’s vaulting ambition; he is a man who wants the apple from the top of the tree, she tells us. The dialogue becomes naturalistic as she describes the dangerous consequences of his ambition to win. People could get killed, including her family. She wants him to lose. 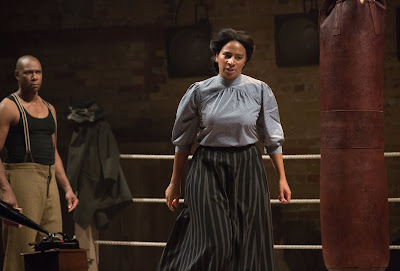 Dion Johnstone and Sabryn Rock. Photo: Cylla von Tiedemann.
Intriguingly, Jackson’s opponent for the championship is his sister Nina. She is his sister, she is his opponent and she is the white fighter as the siblings dance around the rink. This is a great summation of all the issues surrounding Americana as it was then and as it is now.

Dion Johnstone as Jay has all the attributes required for the role. He is so well endowed with muscles that he could be mistaken for a boxer. He gives a superb performance as the ambitious, smart, colourful character who breaks down social and racial barriers but does not solve any problems.

Diego Matamoros as Max is a white racist but a good promoter. Christef Desir as Fish as Johnson’s sparring partner and Alexander Thomas as his trainer give fine performances. The most interesting character after Johnson is his sister Nina played by Sabryn Rock. She shines the light on her brother’s character and she is aware of the broader issues and consequences for blacks if he wins. She is intuitively right on all accounts but she is looking at the present and the past. An exceptional performance.

The set by Ken MacKenzie emphasizes the boxing ring and the sound design by Thomas Ryder Payne and the lighting design by Michelle Ramsey give us the sounds and lights of a boxing match that is happening only symbolically in front of us.

Director Guillermo Verdecchia puts the whole thing together for an exceptional night at the theatre.
_____

The Royale by Marco Ramirez continues until November 11, 2018 at the Young Centre for the Performing Arts, 55 Tank House Lane, Toronto, Ontario. www.soulpepper.ca