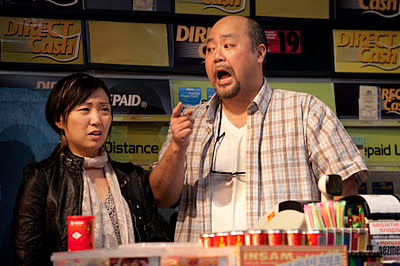 Ins Choi calls Kim’s Convenience “my love letter to them [his parents] and to all first generation immigrants.” It is an apt description of this warm, touching and funny paean to newcomers to Canada. People who arrive in a strange land where they do not speak English and must adjust to a completely different culture.

The play is about a Korean family which operates a convenience store in Toronto’s rough and tumble Regent Park. If they were Greeks, the play would be set in a restaurant, if Italians, in a construction site and so on as the stereotypes of immigrants evolve and flourish.

A convenience store where Koreans and others spend countless hours trying to eke out a living seems hardly a conducive subject for a play. Ins Choi has discovered a way of creating a world with humour, pathos and well-defined characters that make up for delightful theatre.

Mr. Kim (Paul Sun-Hyung Lee) was a teacher in Korea but now has to run a small store, watch out for thieves and see his children move away from his cultural roots and become “Canadian.” Like many immigrants he lives in the past, in the culture that he left, while his children live in the present and have little connection with the past.

For Mr. Kim what happened in 1904, Koreans’ relationship with the Japanese and the history of Korea are a daily part of his life. When a Japanese-made car parks in front of his store, he calls 911! He wants you to know that in 1904 Korea defeated Japan. He rhymes off significant events in Korean history with alacrity and pride.

His son Jung (played by the playwright) ran away from home while young and racked up a criminal record. His daughter Janet (Esther Jun) is pretty, smart, self-confident and wants to be a photographer. She is not interested in running the store.

The mother, played lovingly by Jean Yoon, understands everything and knows that love and patience are the only way to deal with her husband and her children.

Choi brings in a number of colourful characters into the story all played very ably by Clé Bennett. We have the thief, the real estate agent and the cop. The cop has a crush on Janet and she wants him too. There is a hitch: he is black and there is fear that the bigotry harboured by so many immigrants will conquer love. Not so. Mr. Kim is intelligent and humane and does not allow prejudice to interfere with his judgment.

The production, directed by Weyni Mengasha, features simply marvelous performances. Lee is superb as the gruff, humane, funny and decent father. High marks to Bennett who presents the five visitors to the store with excellent versatility and to Jun who is attractive, lively and sassy as Janet.

I make no secret that Kim’s Convenience struck a chord in my immigrant’s heart. It is a subject that is not examined often enough with intelligence and sensitivity. Immigrants are too often viewed as objects of ridicule as if their heavily accented English and their connection to their past make them “different” and most certainly inferior. Their story perhaps is told best when they tell it themselves as in Choi’s love letter to us all.

A wonderful night at the theatre.