OF MICE AND MEN FROM OPERA AUSTRALIA IN MELBOURNE 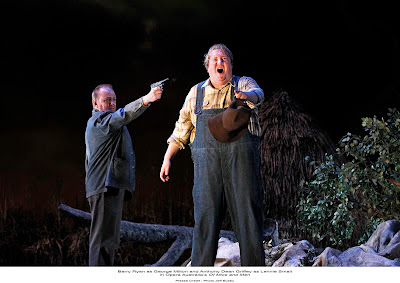 Of Mice and Men, Carlisle Floyd’s opera based on John Steinbeck’s novella of the same name, premiered in 1970 in Seattle, Washington. It has had a number of revivals since but it did not reach Australia until July 2011 when Opera Australia produced it at the Sydney Opera House. That production directed by film director Bruce Beresford was transferred to the Arts Centre Melbourne for four performances between November 26 and December 10, 2011.

The novella is a parable about friendship, the search for roots and the dreams of ordinary people. Two men, the cynical and wiry George and his friend, the ironically named Lennie Small are migrant farm workers in depression-era California. Lennie is a simpleton who loves animals and soft things but has an unwitting propensity towards violence. That characteristic will destroy the two men’s dream of acquiring their own farm and provide a truly harrowing and unforgettable ending.

Floyd has attempted to give musical and vocal expression to the seemingly simple story and has produced a significant modern opera. The piece has some visceral music, some marvelous lyrical and moving passages and captures the spirit of the novel.

American tenor Anthony Dean Griffey sings the role of Lennie. Griffey’s Lennie is a big man with enormous physical strength but severe mental limitations. He is like a cuddly bear that can crush you in the mistaken belief that he is showing affection. Griffey showed vocal and physical strength and emotional breadth. He has a marvelous duet with Curley’s Wife where both express their dreams, she of becoming a movie star and he of getting a farm.

Lennie’s most emotionally and vocally powerful moment comes at the end of the opera when he imagines his farm as George, standing behind him, describes it. He yells a heart-wrenching “I see it” as George shoots him.

Australian baritone Barry Ryan takes on the role of George, the small, intelligent friend of Lennie who could live a much better life without the mentally challenged charge. But he does not partially because of a sense of obligation (a promise to an aunt) but mainly because of human love, decency and simple friendship. Ryan was very effective in the role although he was not as vocally powerful as one may wish.

The floozy, dim-witted and abused Curley’s Wife (she does not have a name) is sung by soprano Jacqueline Mabardi. She plays the part quite well and sang it well and, as stated, is very effective in her final scene with Lennie where she is gains the audience’s sympathy in the expression of her dream of becoming a Hollywood actress, just before she is smothered to death.

Her obverse is the unsympathetic and brutish Curly sung by Australian tenor Bradley Daley. A capable performance. New Zealander Jud Arthur is superb in the role of the pathetic, old farm hand Candy who shares Lennie’s dream of owning a piece of land.

Beresford and Designer John Stoddart give us a realistic presentation of the clearing in the woods where the opera begins and ends and of the bunkhouse on the farm where the rest of the action takes place. A number of paintings of life on a farm are projected on the stage and a realistic film clip is shown of Lennie running away after he inadvertently kills Curley’s Wife. The video is good but the lighting from the orchestra pit made it difficult to watch. I was relieved when it was turned off and I could see the bright colours of the set again.

A very effective production of the opera which has some powerful moments but also some banal passages where ordinary English is sung in recitative to no great advantage.
____

Of Mice and Men by Carlisle Floyd opened on November 26 and was performed four times until December 10, 2011 at the Arts Centre Melbourne, 100 St. Kilda Road, Melbourne, Australia. www.operaaustralia.com,au