HIGH LIFE HAS SOME VERY FUNNY LOW LIVES AT SOULPEPPER 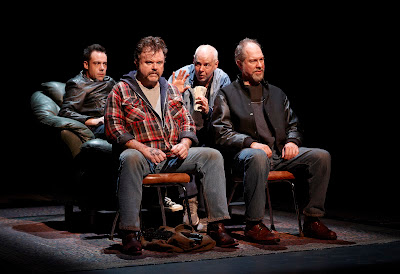 Lee MacDougall’s High Life is a very funny play about four criminals trying to pull off a major bank robbery. It is now playing at the Young Centre in a production by Soulpepper Theatre Company.

A play can be very funny without necessarily being very good but let’s look at the bright sides of the production first.

McDougall has created four criminal characters that one of them describes as “pathetic freaks of nature.” They are drug addicts, thieves, fraud artists and all but one have spent many years in prison. Dick (Diego Matamoros) is the tough, smart one of the group who wants to rob ATM machines from inside and make everyone rich. He is foul-mouthed (they all are) and the dominant member of the group.

Donnie (Oliver Dennis) is a pathetic petty thief who specializes in stealing purses and using the bank cards to steal small amounts of money from their accounts. Where does he get the pin numbers? Eighty per cent of people have their pin numbers somewhere in their wallets. Donnie is a physical wreck with one kidney not functioning at all and the other one working at 40% capacity among an array of ailments that are a good source of black humour. Dennis is outstanding in the role.

Bug (Michael Hanrahan) is a pit-bull of a man who seethes with violence. He is of the belief that if you hit a guy and he dies, it does not mean that you have killed him! Hanrahan is a big, burly guy (or at least projects it in the role) and he gives a first-rate performance.

Billy (Mike Ross) is a con artist who is a hit with women. He claims he seduces as many as two women a day. He is addicted to morphine like the rest but has never spent a day in jail. Ross looks spaced out like an addict and one is not sure how women find him that attractive but so be it. Very well done.

These characters are almost archetypes from Hollywood gangster movies but they do provide marvelous acting possibilities. The four actors take full advantage of the opportunities and they are melodramatic, violent and quite funny and almost object lessons in the breadth of talent possessed by each of them. Matamoros is outstanding as the tough leader. I am used to seeing him as the quiet, introverted type and sometimes even the wimp and I do not recall ever seeing him in a role similar to that of Dick.

Director Stuart Hughes does a good job overall and my only comment is that in trying to achieve a brisk pace he is rushing the actors a bit much. The speed he tries to achieve resulted in some muffed lines and some unnecessary overlapping.

The play is set in a dingy apartment and a car where the criminals are waiting for their opportunity to break into the ATM machines. The dingy, sparely furnished apartment by Set Designer Lorenzo Savoini is fine but the scene in the car left me cold. Instead of pulling up two chairs to represent the backseat of the car, they use the couch from the apartment. This is not a realistic scene in a car but a couch for a backseat is unnecessary.

The play itself develops the four characters with all their swearing and injection of morphine or ingestion of pills and looming violence amid the black humour. The main plot is the planning of the bank job and in the end it wears a bit thin. McDougall keeps inventing material to keep the plot going but there is simply not enough to keep the piece going at full tilt.

The play was first produced in 1996 and won a Dora Award for Best New Play and nominated for other awards. Much of the thinness of the plot is covered by good dialogue and the totally outstanding acting of the four actors.
_____