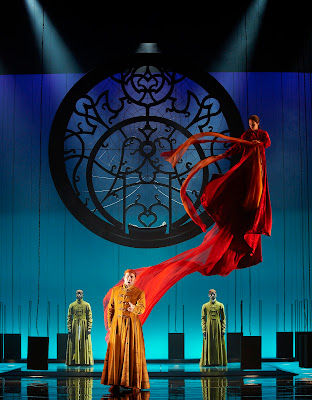 (left to right) Acrobat Antoine Marc, Russell Braun as Jaufré, acrobat Ted Sikström and acrobat Annie-Kim Déry (in the air) in a scene from of Love from Afar, 2012. Photo: Michael Cooper
Reviewed by James Karas

Love from Afar is a 21st century opera by Finnish composer Kaija Saariaho that has received a visually stunning and vocally outstanding production from the Canadian Opera Company. The conception, direction and design for the production are products of the fertile imagination of Daniele Finzi Pasca. He deserves an extended standing ovation for bringing to life a static if beautiful opera.

At first blush, the plot of Love from Afar looks like a pretty unlikely subject for an opera unless boredom is the prime objective. A 12th century prince from Aquitaine falls in love with a countess from Tripoli. They have never met and their only means of communication is through a pilgrim. When they do meet the prince is stretched on a gurney and about to die.

From that unprepossessing material, Saariaho weaves a musical and vocal tale that appears static but can be made into something theatrically quite extraordinary. Most of the opera is made up of long solo singing or duets with the Prince and the Pilgrim, and the Countess and the Pilgrim. The setting is Aquitaine, the sea and Ancient Tripoli.

The music goes from dark tones to shimmering chords as the lovers express their longing, their passion and their fears. The three characters have two doubles each that give external expression to the internal emotions of the character that they “duplicate” or express a different state of mind. I am not completely sure about the full intent of the use of doubles but they are effective.

In addition, there were acrobats floating above the action at times. When the Prince is singing about the Countess there is an acrobat hovering above him. The projection of the sea when the Prince is crossing the Mediterranean is dramatic and a visual delight. Robert Lepage, forget the flying planks at the Met’s Ring Cycle. Call Pasca Finzi to give you a Rhine River.

Canadian baritone Russell Braun sang the role of the prince Jaufré Rudel with resonance and emotion. Canadian-American soprano Erin Wall displayed her gorgeous voice as Clémence, the Countess of Tripoli, especially in the Middle Eastern cadences of the opera. There are no show-stopping operas but there are stretches of sustained notes of love and passion that are simply gorgeous.

Johannes Debus conducted the Canadian Opera Company Orchestra and helps create the ethereal quality of the opera, so full of longing and unrequited love. Quite a piece.
_____