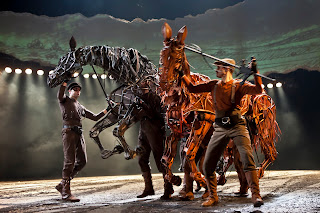 Radio, television and the local papers gave the event the type of coverage and hype reserved for sports events or pop stars. No, the Maple Leafs did not make it to the playoffs and Madonna is not giving a concert in the Rogers Centre. The brouhaha outside the Princess of Wales Theatre, with news media running around, cameras poised to record the every movement, mounted policemen at the door indicated something of momentous, indeed, extraordinary, importance.

What was the fuss all about? Well, it was the opening of … a play. War Horse, that is, a play adapted by Nick Stafford from Michael Morpurgo’s children’s book of the same name. It is about a boy and his horse that are separated by a world war but eventually get together again.

That is no doubt true but it is like saying the Titanic was rowboat that overturned in Lake Ontario. War Horse is in fact a very moving story, a spectacular war play, an extravagant theatrical experience and a drama that, once you have seen it, you will never forget.

War Horse opens unprepossessingly enough with a foal running around. It is not a real horse, of course, but a puppet manipulated by three people who are perfectly visible. In a few moments, the foal handlers will thow their arms up in the air and the pony will become a fully grown horse. From then on two people will control the horse’s movements from inside and one person will manipulate the horse from the outside. The play has a number of horses that strut, run and kick in a similar way.

What is the effect? The movements of the horse from raising its head, to running, to eating, to flicking its tail are so realistic, if that is the right word, that we cease seeing the handlers almost immediately and the moving skeleton becomes a real horse. This is not mere suspension of disbelief but actual conviction without any effort that what we are seeing is a horse. We grow to love and sympathize with the fate of Joey, the main horse of the story.

The Handspring Puppet Company which is credited with working with Nick Stafford in the adaptation of the novel provides some birds that fly around and a goose that runs around the farm but the really memorable puppets are the incredible horses.

There is more. There is World War I that is “covered” from its declaration in August 1914 to its murderous conclusion on November 11, 1918. With the judicious use of projections, stunning music and the use of the puppets and people, War Horse is an incredibly effective re-creation of the horrors of the war. Modern technology, music and outstanding design and directing, show that live theatre can in some ways outdo even the movies in the reproduction of moving war scenes.

All of the above are assembled to tell the story of Joey as a foal (handled by Mairi Babb, Patrick Kowk-Choon and Rahnuma Panthaky) and Joey as a grown horse (handled by Brad Cook, Bryan Hindle and Caden Douglas) Joey is purchased by farmer Ted Narracott (Brad Ruby) and it becomes Albert Narracott’s beloved horse.

The war intervenes and Joey is taken by the British cavalry to the Western Front where his British rider is killed and the horse ends up in German hands. We meet German soldiers including Friedrich Muller (Patrick Galligan) who deserts and becomes an ambulance driver with Joey as the workhorse.

The war scenes including the death of people and horses, the bombing and the appearance of tanks is shown in starkly stunning scenes. Joey and Albert are eventually re-united in a scene that did not leave a dry eye in the house. I am not exaggerating at all.

War Horse is a production of the National Theatre of Great Britain, directed by Marianne Elliott and Tom Morris. The Toronto production uses all local talent.

This is no boy and his horse story. It is elemental and unforgettable theatre.
___

War Horse based on the novel by Michael Morpurgo, adapted by Nick Stafford and Handspring Puppet Company opened on February 18, 2012 at The Princess of Wales Theatre, 300 King St. West, Toronto, Ontario. www.mirvish.com.