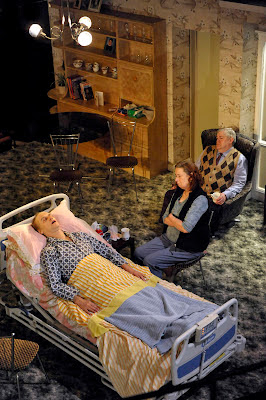 In Basildon is a new play by David Eldridge, now playing at London’s Royal Court Theatre. The play has some marvellous scenes that are moving, funny and almost macabre but Eldridge seems to lose his way a couple of times and follow some unwarranted pathways.

The main plotline involves the death of Len (Phil Cornwell) and the question of the distribution of his estate between his two warring sisters, Doreen (Linda Bassett) and Maureen (Ruth Sheen). There is Len’s good friend Ken (a rotund and excellent Peter Wright) and Pam (Wendy Nottingham), a decent and perhaps nosey neighbour. Doreen’s son Barry (Lee Ross) and his ample wife Jackie (Debbie Chazen) are also keenly interested in Len’s estate. Maureen’s daughter Shelley (Jade Williams) shows up with her idiotic boyfriend Tom (Max Bennett), but she is not interested in joining the beneficiary pool.

The opening scene is dramatic enough. Len is on his deathbed, slowly breathing his last as his sisters who have not spoken to each other for some twenty years spew venom at each other. We watch and hear Len until his last breath. Here the staging has major problem in that the theatre is divided in two and there are seats on each side of the playing area. For those near the front on one side, the dying Len is invisible.

These are working class people with very little in the way of property and the fear and anxiety about who will get Len’s money increases as does the backbiting among the characters. There is also plenty of laughter in the play.

The plot development towards the reading of a lawyer’s letter about the will (reading the actual will is too hackneyed for words) is good enough but Eldridge cannot stay on the straight and narrow.

First diversion is towards the title. Basildon is an area near London in Essex where people migrated after World War II. Eldridge dedicates some lines to singing the praises of this area and giving us to understand that the people who live there are special and different. OK, put Basildon on your itinerary for your next voyage into the void.

Next, Eldridge decides to get political and they argue over Labour v. Conservative Parties and who did what to the country. Working class Basildon is conservative but we can do with less politics and more plot.

If that were not enough, we have Tom, the son of a banker who wants to help the lower classes. He disagrees with his father and wants nothing to do with him (except receive monthly support cheques). Some of this is entertaining and perhaps a necessary subplot but I think it is not an entirely well-fitted appendage to the play.

The play has some very funny moments as when the cowish Jackie wants to have sex with her husband because she is ovulating and she does not want to miss another month. Well, he is eating a sandwich at the time and priorities are priorities.

Bassett and Sheen are excellent as the siblings who cannot stand each other and Williams’ Shelley, young attractive, sensible, is a breath of fresh air.

The play has a fourth act set 18 years before the death of Len. If this was supposed to explain the sisters’ hatred and tie some loose ends, I did not find it particularly effective. Bur the scene with the Reverend David Williams (Christina Dixon), a black pastor who comes to talk to the family about funeral arrangements and proceeds to get drunk, is simply hilarious.

Praise is due to Director Dominic Cooke for stick-handling the flawed play brilliantly. Designer Ian MacNeil’s decision to put the playing area in the middle of the theatre between to banks of seats is questionable at best.

The diversions and the staging do not ruin the play because the striking situation, the fine acting and the humour do add up to a fine night at the theatre.
_____

In Basildon by David Eldridge opened on February 16 and continues until April 5, 2012 at the Royal Court Theatre, Sloane Square, London, England. www.royalcourttheatre.com/