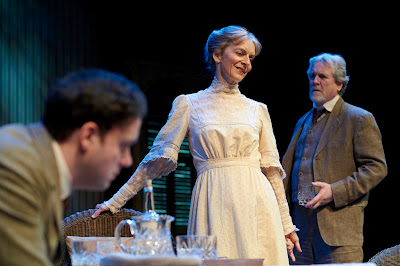 The journey that Eugene O’Neill presents in Long Day’s Journey into Night is indeed long and the night when it arrives is very dark. He wrote this autobiographical play in 1941 and asked that it not be produced until 25 years after his death but his wife allowed it to be staged in 1956. He died in 1953.

Long Day’s Journey is a landmark play of the American theatre. It tells the story of the dysfunctional Tyrone family where booze, drugs, tightfistedness, sibling rivalry and illness provide for very potent drama. James Tyrone (Joseph Ziegler) is a talented actor at the end of his career who wasted his gifts on a single, second rate play that he acted in for the money. He knows what poverty is and perhaps as a result he is almost pathologically miserly.

His wife Mary (Nancy Palk) is a drug addict who at one time wanted to be a nun. She comes from a family with status. Their older son Jamie (Evan Buliung) is a self-destructive drunkard who is jealous of his younger brother. Edmund (Gregory Prest), the younger son, is artistic and has consumption. He is a portrait of the author.

Diana Leblanc directed Long Day’s Journey for the Stratford Shakespeare Festival back in 1995. She was lucky in having two extraordinary actors for the lead roles in William Hutt as James and Martha Henry as Mary. It was a landmark production in which the lead actors took possession of their roles and seared into the memories of the audience. For this production Leblanc has Joseph Ziegler and Nancy Palk for those parts and therein lies the problem.

Tyrone is a man of the theatre, a matinee idol and a one-time Shakespearean actor who was complimented on his Othello by no less a personage than the great Edwin Booth. Ziegler is moving and dramatic but there is no hint of theatricality in him. By the end of the performance I thought I was watching Willy Loman from Death of a Salesman instead of James Tyrone.

There is a similar problem with Nancy Palk. She is a powerful actress with a robust voice and is placed in the role of a fragile woman going to pieces. The journey into night is largely hers as she descends into madness. Palk does capture some of the high qualities of Mary and does indicate some of the descent into hell but she lacks the fragility to be fully convincing in the role.

The sons have much better luck. Evan Buliung is outstanding as the drunkard Jamie. He is not only self-destructive but he subconsciously and perhaps even more so consciously tries to destroy his younger brother who he thinks is favoured by his parents. In the great confessional scene near the end of the play, Jamie admits his reprehensible conduct and there is a reconciliation of sorts and an expression of deeply rooted love.

The consumptive, poetic Edmund is drawn with affection and care by O’Neill and acted with precision and emotional depth by Prest. Prest and Buliung play well against each other and are a pleasure to watch.

The production misfires because it fails to capture the world in which the Tyrones live. James is an actor who sees his life as a failure because he failed to act in great plays such as Shakespeare’s and sold out for money. That is a major component of the play. Palk’s performance also misfires because there is no fragility in her. She does get some upper crust mannerisms but there is not enough in her performance to bring the horror of Mary’s descent to full light. The sons do very well but that is not enough to rescue the production from the acceptable and raise it to the exceptional.
________

Long Day’s Journey into Night by Eugene O’Neill opened on February 23 and will continue until March 31, 2012 at the Young Centre for the Performing Arts, 55 Mill Street, Toronto, Ontario. www.soulpepper.ca 416 866-8666.