BACCHAE IN WILD PRODUCTION BY YOUNG ACTORS IN LONDON 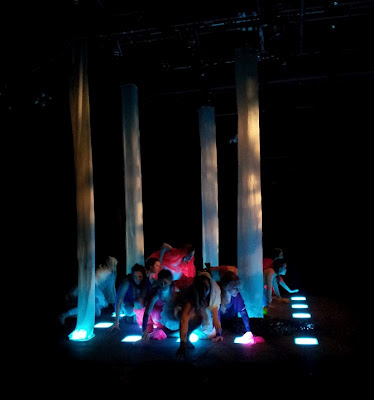 As you are waiting in the tiny hallway to enter the small Theatro Technis on Crowndale Road, London, you hear some rowdy noises. About a dozen young girls come pouring in from one of the auditorium doors, jumping, yelling, chanting, dancing. They are dressed in colourful outfits, some with veils, some in tights of various colors, and short skirts.

When you enter the theatre, you find it full of smoke and the young ladies are on stage dancing and chanting. A performance of Euripides’s Bacchae is about to begin and you realize that they are the Chorus.

This is a wild production of the classic by the Fourth Monkey Theatre Company, a troupe of young actors who range in age from 18 to 30. They are using Ranjit Bolt’s rhyming couplets translation, are not exactly faithful to the text and despite some obvious issues, they generate a lot of energy and give a fascinating production of a very difficult work.

The first chorus that is chanted/yelled by the Chorus is not entirely clear but you soon see Dionysus (Jack Riddiford) arrive. He is wearing a white suit, a hat and sunglasses with an electric guitar slung around his neck. A would-be rock star? He delivers his opening speech explaining who he is.

The Chorus will remain on stage throughout but their wild and somewhat incomprehensible yells will be transformed into a couple of beautiful chants and some segments spoken by several members.

All of them are young actors and there is no attempt made to make them look older by the use of costumes, makeup or voice change. The men are dressed in slacks and flannel jackets with Pentheus, wearing black. He does not believe that Dionysus is a god and the latter will prove his point by providing one of the most harrowing scenes in all drama. Pentheus will be torn to pieces by the possessed women of Thebes, the bacchants. One of the women tearing Pentheus to pieces is his own mother Agave.

The actors show considerable ability in handling the rhyming couplets and Euripides’s complex text. Dionysus may be a god but he is also a spoiled child who resents his lack of recognition and becomes brutally vengeful. This may not be everybody’s idea of Dionysus but Ridddiford does a very good job in presenting him as director Natalie Katsou sees him.

Stuart Mortimer’s Pentheus is young and self-righteous and pays for his lack of faith in the new god who is also his cousin. Agave and Dionysus’ mother Semele are sisters. She was raped by Zeus and the result was Dionysus.

Sam Adamson with his mop of red hair and youth makes a good messenger, delivering his lines with precision. Delaney and Sisterson play much older parts and some attempt to indicate old age would have been nice and Katsou’s choice to leave the two old characters as young men is questionable.

Agave shows genuine emotion at the discovery of her son’s fate and gives us a dramatic scene.

Ancient Greek tragedy is notoriously difficult to produce and an interpretation however eccentric that retains some fidelity to the text and captures the central idea of the plot is worthy of applause.
______

The Bacchae by Euripides in a translation by Ranjit Bolt in a production by Fourth Monkey Theatre Company ran from March 1 to March 17, 2012 at the Theatro Technis Theatre, 26 Crowndale Road, London, England. www.fourthmonkey.co.uk