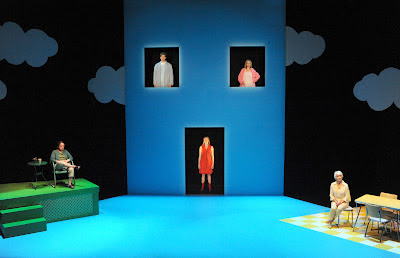 The Happy Woman is a new play by Rose Cullis that is now playing at the Berkeley Street Theatre, Toronto, in a production by Nightwood Theatre.

You don’t have to be a member of Mensa to guess that the title is meant ironically and that no play can have a beginning, a middle and an end with the word “happy” having straight-faced applicability.

The “happy woman” is Margaret (Barbara Gordon). She has a son named Christian (Martin Happer) who is married to Stasia (Ingrid Rae Doucet) and a daughter named Cassie (Maev Beaty). They have a rather self-righteous and nosey neighbour in BellaDonna (Maria Vacratsis) but life is good.

Margaret has a sunny, optimistic disposition and although there may be some clouds lurking on the horizon and perhaps hidden in the past, she is unwilling or unable to see anything but sunshine. Let’s start with the acting kudos and give a big bag of the stuff to Gordon.

Christian is a fine young man who strives to do well by his wife and sister. He seems to have a very close relationship with Cassie and they do not hesitate to engage in some physical horseplay like very loving siblings. Well, you cannot deny that Happer does a good job in the role.

Cassie is a bit of a problem. She has unorthodox attitudes towards sex or let us say that she errs on the generous side of partaking in it and prefers the express rather than the slower collector lanes in getting to it. Beaty’s character has more serious issues than promiscuity and a fine acting job does justice to the problems that Cassie is facing.

Christian’s wife Stasia is pregnant and her behaviour ranges from the erratic to the psychotic. In fact she starts seeing things, screams uncontrollably and eventually ends up in a psychiatric unit where she gets electric shock treatments. She is so annoying at times you want to smack her. Doucet is perfect for the role.

BellaDonna, the neighbour, is placed on a platform and watches the action and comments on it. She is sane, realistic, self-righteous, a busybody and a gossip of the first order. She is the antithesis of the “happy woman”. A superb acting job by Vacratsis.

The plot develops in alternating scenes of the actors addressing the audience directly or interacting. We know there will be a big punch line from the title alone and the programme note stating that this is a “darkly comic exploration of what happens when bliss gets in the way of truth” sets the tone for what we are to expect.

The comic is almost non-existent. There are very few chuckles here and even in the darkest of plays we can and do get some big laughs.

What about the big secret? Let’s put it this way. The Happy Woman reminds me of someone with no talent for the art trying to tell a joke. You know the type: he starts the story, forgets his line of thought, changes his mind and by the time he gets to the punch line the joke is ruined.

Cullis’s build-up to the revelation of the dirty family secret is slow and methodical but you have almost lost interest by the time they get there. And then, the story was told so slowly that the punch line barely registers.

Director Kelly Thornton gets good performances from the actors but the structure and the content of the play are of little help in building up suspense and then shocking us when we discover the awful truth beneath the veneer or the weasel under the coffee table as Harold Pinter put it.

The unrealistic set consists of a turquoise cut-out of a two storey house at the back and a green platform for BellaDonna to sit on the side. It is appropriate for the play.

The Happy Woman may be more effective if it had been cut to a taut one-act play where the characters are developed briskly but effectively and we are in fact shocked by what went on in that family.
______

The Happy Woman by Rose Cullis opened on March 7 will run until March 24, 2012 in a production by Nightwood Theatre at the Berkeley Street Theatre Downstairs, 26 Berkeley St. Toronto, Ont. www.nightwoodtheatre.net