SHE STOOPS TO CONQUER IN UPROARIOUS PRODUCTION FORM NATIONAL THEATRE 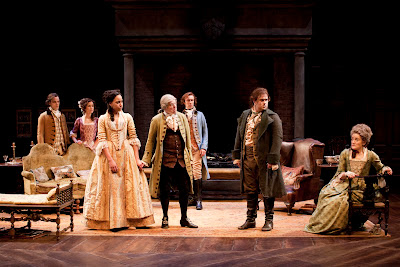 The comedy of mistaken identity is as old as the theatre itself and one of the best users of the device is Oliver Goldsmiths 18th century classic She Stoops to Conquer. It is now playing at the National Theatre in London in a wonderful production directed by Jamie Lloyd.

Londoner Charles Marlow is sent by his father to the country to see about marrying the young and pretty Kate Hardcastle.

Charles and his friend Hastings lose their way and are deceived into thinking that the Hardcastle house is in fact an inn. They arrive there and start treating the owners as innkeepers.

Marlow is very shy around upper crust women but he does fine with the lower orders. Kate pulls another mistaken identity stunt by pretending she is a barmaid. Hastings wants to elope with Constance and she has to pretend she loves Tony, Mrs. Hardcastle’s dunce of a son, in order to achieve their end.

It is a comedy rich in possibilities and the National Theatre production takes advantage of all of them and then some. Goldsmith’s wit, the broad comedy and the nicely unwinding plot come out marvelously in a delightful production.

The cast comes in for high praise with s couple of reservations. The broad comedy is provided by Steve Pemberton as the bewildered and put-upon Mr. Hardcastle and the equally stressed and distressed Mrs. Hardcastle of Sophie Thompson. Mrs. Hardcastle’s son Tony who plays the trick on the two men is stupid, illiterate and very funny in the hands of David Fynn.

Harry Hadden-Paton is the leading male as Marlowe who is shy with some and quite free, indeed, obnoxious with others whose identity he does not know. John Hefferman as Hastings has to move quickly to arrange his getaway with the lovely Constance of Cush Jumbo and to fool Mrs. Hardcastle. Excellent performances.

City sophisticates meeting country bumpkins is a perennial source of humour and Lloyd does not miss any opportunities for humour overall but especially with the servants. They are not used to high-toned city folk and trying to raise their standards is hilarious.

Lloyd, for some reason, has decided to add music and dancing to the play. During several scene changes, the servants and some of the other characters break into cacophonous song and rowdy dance. It is not part of the play and makes no sense. The play is funny enough without dumb additions.

The other negative comment is mild overacting that results in actors stepping out of character. There were some very funny moments when the audience was laughing so hard that the actors stopped and repeated a gesture for the added laughter. The stage manager should simply tell them to knock it off. You are acting in a play by Goldsmith, not collaborating with him.

A hilarious night at the theatre.

For those who do not have easy access to the south bank of the Thames River, She Stoops to Conquer will be broadcast in movie theatres in Canada on March 29, 2012. For details visit www.ntlive.com and for Toronto and other Canadian cities go to http://www.cineplex.com/Events/NationalTheatre/Home.aspx.
______
She Stoops to Conquer by Oliver Goldsmith opened on January 31 2012 and continues until April 21, 2012 in repertory at the Olivier Theatre, National Theatre, South Bank, London, England.