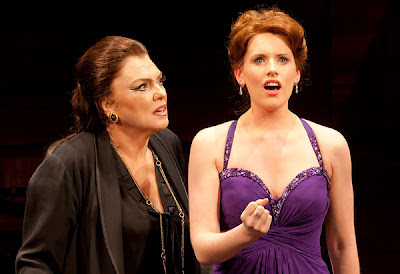 Maria Callas has been dead for almost thirty-five years and her career ended well before she died in 1977. But her reputation as the greatest soprano of the century and her legendary personality have continued to thrive and provide fodder for critical acclaim and popular biographies.

In 1995, American playwright Terrence McNally paid tribute to Callas by dramatizing an imaginary master class that she gave well after her voice had gone. It is a story of the lion in winter, when her teeth and strength are gone but she has kept her strong personality and has memories of her greatness. Callas did in fact give some master classes at Julliard in 1970-1971 but they bear no relationship to the play. The best that can be said is that those master classes suggested the idea for Master Class to McNally.

Callas appears on the stage wearing a black suit with a piano accompanist and she will hear, judge and advise young singers in the art that she excelled at and dominated. Well, that may be the intent or usual structure of a master class but in the hands of Callas nothing is done in the usual course.

McNally’s Callas is imperious, domineering, sardonic, sarcastic, in a word, a diva. Above all that, she is a singer, a musician, an actress who is totally steeped in her art. She expects everyone who approaches that art to do so with complete, indeed religious, dedication, conviction and fervor.

All of these characteristic are displayed in her relations with her accompanist Emmanuel (Jeremy Cohen), the stagehand (Gerard Carey) and the three singers who she is to coach. They are soprano Sophie de Palma (Dianne Pilkington), mezzo soprano Sharon Graham (Naomi O’Connell), and tenor Anthony Candolino (Garrett Sorenson).

Tyne Daly has the look and mannerisms of a diva and her sarcasm comes with precise aim and produces the desired laughter. It is a bravura performance that brings out the ego and former greatness of Callas but there is a complaint. Callas berates her students (victims, really) about their diction. When Sharon sings the word “Macbetto” she is told that it has two t’s. The problem is that Daly’s diction is not perfect. Not that we are expecting her to copy or imitate Callas but we have a right to demand that her diction be perfect.

Daly has a touch of a New York accent modified with Mediterranean tones but she cannot get the hard r’s nor pronounce her real name, Kalogeropoulos or Kalogeropoulou properly. She should also wait for the laughter to stop before saying her next line.

Pilkington was excellent as the shy singer who wants to be heard by Callas and manages to sing only one note. O’Connell’s character is humiliated to the point where she runs off the stage and vomits in the bathroom. But she has the gumption of a diva and returns to face Callas. In a marvelous scene, she stands her ground and puts Callas in her place. A superb performance.

Sorenson does even better: he takes the sarcasm, stands his ground and manages to sing a whole aria, quite well, one might add.

The accompanist also manages to get a few laughs.

The one who is not wowed by Callas and gets laughs by his insouciance and insubordination is the stagehand. It’s a small part but Carey makes the most of it.

This is a Manhattan Theatre Club production that opened on Broadway and has been transferred to London. Stephen Wadsworth directs deftly except for the comments above.

In the end we get a few facts about Callas from her time in Greece at the beginning of her career during World War II, to her marriage to the hapless businessman Menegheni and the relationship with Ari Onassis. But that is mere background to her immersion in opera. The rest may be fictitious but it fits with our image of a diva and is a lot of fun.
______

Master Class by Terrence McNally opened on February 7 and will continue until April 28, 2012 at the Vaudeville Theatre, The Strand, London.