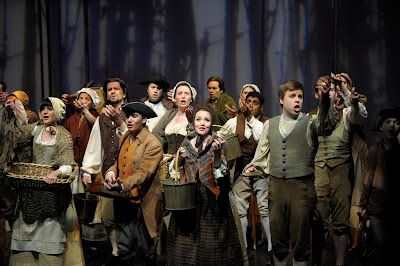 Toronto Operetta Theatre is nothing if not ambitious. Its name may suggest productions of safe, light operettas from the 19th and early 20th centuries to amuse old men who wear suspenders and ladies who wear hats. Nonsense. For TOT and its General Director Guillermo Silva-Marin operetta is alive and well with neglected works to be discovered and new ones created.

This year TOT has gone a big step further in producing a Canadian musical, on a Canadian theme, in its premiere professional performance and commemorating the bicentenary of The War of 1812.

TAPTOO! is by composer John Beckwith and playwright James Reany and I don’t think it qualifies as an operetta by any measurement but it is decidedly a musical. It is supposed to cover a period of thirty years from 1782, I suppose, to the brink of The War of 1812. The timeline of the libretto is less than clear and most of the time I had no idea of the date. Nor could I find a link to The War of 1812.

We do get the clash between the largely English settlers in North America who rebel against British rule and those who remain loyal to the king. The rebels will become Americans and the loyalists will become “not Americans” and will eventually evolve into Canadians.

The rebels of the opera are led by Colonel “Mad Anthony” Wayne (Robert Longo) and the loyalists are led by our own John Graves Simcoe (Todd Delaney).

Reaney tries to embrace a great deal of history in his libretto. He has the pacifist Quakers, Mr. and Mrs. Harple (Mark Petracchi and Sarah Hicks) and their son Seth. Harple will be tarred and feathered by the rebels and will end up with the loyalists only to be told that he cannot take his place in the legislature because he refuses to take an oath.

Seth Sr. (Michael Barrett) will marry an Indian girl and we will be taken through battles and later social scenes in Upper Canada where the question will be do we start a ball with a minuet or a step dance.

The musical is written through and because much of it deals with a time of war there is a great deal of rather noisy and military-sounding music. There are some quieter solos, duets and ensemble pieces but the stentorian parts stayed with me.

There are two children sopranos, the 12-year old Teddy Perdikoulias and the 14-year old Daniel Bedrossian. They both have very sweet voices if with somewhat limited ranges. The problem with both is one of volume and enunciation. We want to hear the sweet sounds that emanate from your throats and we need to understand every syllable.

Baritone Todd Delaney was an impressive and domineering Simcoe and baritone Robert Longo was a brusque Wayne. Soprano Allison Longo was a well-sung and sympathetic Indian girl, Atahentsic, well-matched by Barrett as her husband. Mezzo soprano Eugenia Dermentzis was a classy Mrs. Simcoe and sang well.

The small orchestra was conducted by Larry Beckwith, the composer’s son, and it was enthusiastic, sometimes brilliant and frequently noisy. A bit too much brass and percussion.

Guillermo Silva-Marin is credited as Stage Director, Lighting, Set Décor and Dance Sequences. The set consisted of an empty stage and lighting was adequate. The musical has lots of exits and entrances and general commotion interspersed with quieter moments. They are all handled well.

The plot is probably confusing at its best but it gets worse when you cannot understand what is being said. This happened frequently and some of the singers who could be heard over the orchestra could not always carry their notes.

None of which takes anything away from the credit that belongs to TOT for the work that it is doing and for producing TAPTOO! The Lt. Governor of Ontario, David Onley was present and he paid tribute to his antecedent, John Graves Simcoe, the first Lt. Governor of our province. His Excellency stated that TOT is “Canada’s finest operetta company.” No argument.