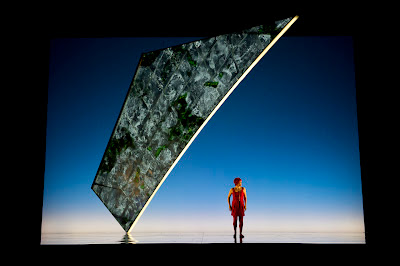 Opera houses are continually making efforts to expand the repertoire by finding neglected work and, more adventurously, producing and even commissioning new works. It is a daunting task because opera lovers tend to be conservative and by and large prefer well known works. The prohibitive costs of staging new operas and the relatively limited audience for them, discourage production of new works.

The Royal Opera House, Covent Garden, is not just any opera house and this year it has produced Miss Fortune, a new opera by Judith Weir, which received its English premiere on March 12, 2012. The opera was commissioned by ROH and The Bregenz Festival and was first seen at the latter venue in July 2011.

Weir wrote her own libretto, based on a Sicilian folk tale. No, this is not Cavalleria Rusticana with an English accent but it is a story about Tina Fortune and her family who mysteriously lose their fortune. In folk tales “mysteriously” is usually attributed to supernatural forces and this case it is Fate.

Tina strikes out on her own and goes to a garment factory, runs a kebab van and a laundry. Fate seems ever present but she meets a rich man and, we guess, regains the status she had at the beginning.

Weir provides a rich variety of music for the story. Most of it is quite approachable but there are segments that, as with many modern operas, I find, that are not easy to take. The chorus of the garment workers and some of the other ensemble pieces are simply beautiful. Some of the accompanied conversations are serviceable whereas in others the music works well in emphasizing and colouring the libretto.

The opera, directed by Chen Shi-Zheng with set designs by Tom Pye, has high production values. Triangular and quadrangular panels in various colours hover over the performers. There is fluidity in the change of scenes that is appropriate to the unrealistic approach and the supernatural elements of the opera. The lighting design by Scott Zielinski is quite dramatic but there were times when I preferred to see the dancers and characters rather than have them in semi-darkness, however dramatic. There was also effective use of video projections.

Soprano Emma Bell, in orange hair and dress, sang with confidence the title role of Tina (Miss Fortune). Her parents, Lord Fortune and Lady Fortune are sung by British bass Alan Ewing and Kathryn Harries respectively. Ewing has a rich, resonant voice and did a very good job in the role. Harries, at 61, maintained vocal control and acted well in the role.

Countertenor Andrew Watts sang quite beautifully and handled the role of Fate with ease. Mezzo soprano Anne-Marie Owens sang the role of Donna, the laundry owner and she was excellent. The role of the hapless Hassan with the kebab van is sung by tenor Noah Stewart. He has a strong voice and carried the marvelous part well.

Miss Fortune lasts barely an hour and a half and the stunning sets, the slick scene changes and the general production values make the time go quickly. It has a good story but I am not sure how well the music will remain in my mind’s ear and how eager I will be to hear the opera without the stage effects.

Miss Fortune by Judith Weir opened on March 12 and was be sung five times until March 28, 2012 at the Royal Opera House, Covent Garden, London. www.roh.org.uk/missfortune