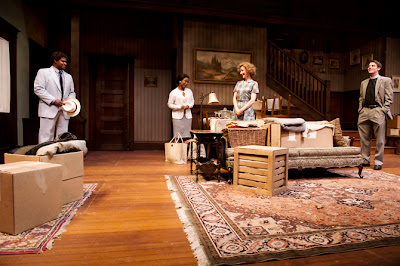 Bruce Norris’s Clybourne Park is an exceptionally funny, dramatic and moving play that has been awarded the Pulitzer Prize. It premiered in New York in February 2010 and was produced in London in September 2010 at the redoubtable Royal Court Theatre. It has finally arrived in Toronto in a production by Studio 180 Theatre at the Berkeley Street Theatre. It is a gripping production of a gripping play and, to coin a phrase, a must-see.

The first act takes place in an ordinary house in a Chicago neighborhood called Clybourne Park in 1959. Russ (Michael Healy) and his wife Bev (Maria Ricossa) are getting ready to move out to the suburbs. They are bantering like any couple but one quickly senses an undercurrent in their conversation: there is something seriously wrong both in the move and in the reasons for it.

They have a deeply personal reason for moving and to whom they sell their house becomes an issue. Jim (Jeff Lillico), the local vicar drops by as do neighbours Karl (Mark McGrinder) and his deaf wife Betsy Kimwun Perehinec).

Russ and Bev have sold their house to blacks and the neighbours are up in arms because that will destroy the neighborhood. You let one of “those” people in and they will come swarming in and here goes the value of your house. Norris exposes the depth of these people’s racism with searing accuracy but that would be a trite achievement if that’s all that he offered. He exposes the neighborhood’s bigotry and indeed evil element in the way that people have treated the white Russ and Bev not for the colour of their skin but for what their son was accused of doing and the way he ended his life. On the issue of bigotry, skin colour is only one element; if you are in any way “different’ your life can be made a living hell.

Healy plays Dan as distracted, angry and anxious, a man in agony who bursts out in obscenities when cornered. His wife is trying to be calm and jolly as they go about getting ready to move but she has problems of her own. A fine job by Ricossa.

Karl is the bigotry catalyst and his deaf wife provides some humour based on her disability which one can probably do without. But the sharp edge of the play is maintained by the two and the Jeff Lillico’s Jim.

The counterweight to these people is provided by Russ and Bev’s maid Francine (Audrey Dwyer) and her husband Albert (Sterling Jarvis). They are black and are treated with the searing contempt that comes from a patronizing and hypocritically “understanding” attitude. Blacks don’t ski, for example, therefore they are different.

The second act of the play takes place in 2009 and we meet the descendants of the people in the first act in the same house. Ironically, Karl was right. Blacks did move in and Clybourne Park did go down and perhaps became a slum. Now the derelict houses are in demand for gentrification.

The people from the neighborhood are now concerned about frontage, height, easements and the Landmarks Committee. They are educated, sophisticated, well-travelled and they want to re-do the neighborhood. The submissive maid Francine has become the self-assured Lena who has memories of the old neighborhood and wants to preserve its history.

Bev, the housewife who tries to please her husband in the first act, is now a lawyer. Russ becomes Dan, a construction worker who finds the box he as Russ buried under a tree in the backyard. Excellent work by Healy. It provides a dramatic connecting link to the past

Indeed the characters played by the actors in the second act are so different from those in the first, that it takes a minute to adjust. The second act provides terrific opportunities, then, for the actors to shine in two very different roles, back-to-back. Their success is marvelous and one must take a deep bow to director Joel Greenberg for his signal success in bringing out the best in the play and the actors.

I saw Clybourne Park in London last year and it was one of those productions that is seared in your mind. Seeing it for the second time and knowing the plot did not take anything away from this superb play and outstanding production by Studio 180.

An excellent night at the theatre.
____