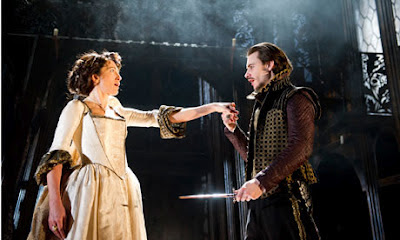 The Duchess of Malfi by John Webster is a grand revenge tragedy which has enough torture, treachery, murder and incest to make some opera librettos seem tame by comparison. The Stratford Shakespeare Festival has produced it twice albeit a few years apart: in 1971 and in 2006. Two years ago, there were two productions of it running simultaneously in London. This year (March 2012), there was a production of the play at the Greenwich Theatre which was followed by another one at the Old Vic.

I was able to catch the Old Vic production in previews. It is directed by Jamie Lloyd with some highly talented actors and is meant to be a major staging of the play.

When the curtain goes up, we are in a grandiose, smoke-filled room. We see people wearing masks, there are candles and the set could be a room in a palace or a cathedral. There are finely wrought railings and woodwork and the place looks dark and forbidding.

Lloyd makes a slight change in the opening scene and we first see the villainous Bosola (Mark Bonnar) being turned down in his request for payback by the Cardinal (Adam Burton).

The Cardinal and his brother the Duke (Harry Lloyd) have a sister, the duchess, who is a young, beautiful widow and marries her secretary Antonio (Tom Bateman). This is unacceptable and it will unleash a series of events that involve spying, murder, treachery and pleasant things like that.

The Duchess is played by Eve Best. She is statuesque and beautiful and has the strength of a lioness. Even when she is given the cut-off hand of her husband, her reaction is understated, to say the least. She does explode a couple of times but this is a Duchess that will not be put down. An outstanding performance.

Bosola is the complex informer, murderer and man of greed and ruthlessness but he does claim to have a conscience. Bonnar plays him with a thick Scottish accent and delivers a frightfully evil Bosola.

The real depravity comes in her brothers the Cardinal and Duke Ferdinand. They are both thin, calculating, outwardly charming but simply vicious. Cardinal’s role was to be played by Finbar Lynch but he was replaced by Burton due to indisposition.

Bateman as Antonio is the upstanding, decent man caught in a web of evil and treachery and he does well in the role.

The dark tone and sets chosen by the director, designer Soutra Gilmour and Lighting Designer James Farncombe are very well suited to this grim revenge tragedy. The presence of candles and the suggestion of being in a church even when we know we are not adds to the brooding darkness of the piece. With the amount of hypocrisy and cruelty, the presence of masks is quite appropriate but Lloyd has enough sense not to overdo it.

The problem with the entire production is one of tempo. The sets, the atmosphere, the acting are handled well but the speed at which the production moves poses a real problem. Lloyd has decided that a slow, deliberate delivery of the lines is called for as if every word that Webster wrote must be enunciated and frequent pauses be made so that we will not miss anything. I thought there were pauses in the middle of sentences that had no indicative punctuation justifying it.

The play takes about three and a half hours to perform with one intermission. Understating the action in a play that has plenty of melodrama from hanging bodies to tortuous strangling is acceptable. But the slow delivery becomes itself tortuous. You feel like yelling “Get on with it” to the actors. Even the strangling of the Duchess by two muscle-bound thugs seems to take forever.

During the intermission, Kevin Spacey, the Artistic Director of the Old Vic, walked by. “Maybe he is going back stage to kick their ass” commented one person.

The Duchess of Malfi by John Webster opened on March 17 and will run until June 9, 2012 at the Old Vic Theatre, The Cut, London, England. http://www.oldvictheatre.com/