ARMIDE RETURNS TO OPERA ATELIER WITH GRACE AND ELEGANCE 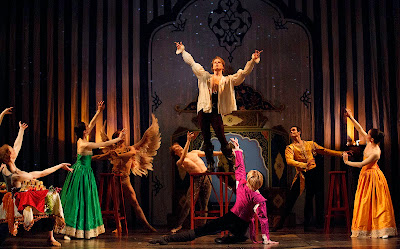 In 2005, Opera Atelier gave Jean-Baptiste Lully’s Armide its North America premiere. That is quite an achievement considering that the opera had its world premiere in Paris in 1686. The opera is back at the Elgin Theatre for Atelier’s spring season.

Armide is a Muslim sorceress who has managed to capture almost all of the Crusaders but not the heroic Renaud. He is a Christian, of course, and her enemy so she really hates him or, make that, really loves him. She has magical powers and uses them to win him over and this tug-and-pull for both of them is the stuff of the opera.

One should mention that the story of Armide and Renaud is contained in an epic poem of 1581 by Torquato Tasso called Gerusalemme liberata that so fascinated artists that it became the source for almost 100 operas and ballets.

Armide is an ideal vehicle for Opera Atelier. It requires a ballet corps, needs original instruments to give it an authentic 17th century sound and it can be performed in a stylized manner and have the flavor of a chamber opera. The Elgin Theatre may not be Versailles in size and décor but it is an elegant venue and exceptionally suited to this type of opera.

Armide is largely static except for the dancing scenes, highly stylized, almost ritualistic in its movements. Director Marshall Pynkoski’s treatment takes advantage and at times suffers from some of these elements. At its best, the production achieves grace, elegance and beauty. There are moments when the static nature of the piece requires some more movement. Pynkoski has tightened the opera by removing the parts of Glory and Wisdom whose main purpose seems to have been to praise the “hero” and in Lully’s time this meant King Louis XIV.

The woman with magical powers who commands demons, visits the underworld and can conquer armies is sung by soprano Peggy Kriha Dye. She is operatically and ritually tormented between Love and Duty and things get so bad that she calls Hate - La Haine – (a sonorous and very convincing Curtis Sullivan) to help her dispel her passion for Renaud.

Alas (a favourite word in the opera) her love is stronger than Hate and she succumbs to her passions. All this is done superbly by Kriha who dominates the performance.

Renaud in the hands of Canadian tenor Colin Ainsworth does not get as much work as Armide but he does an excellent job. His light tenor voice is beautifully suited for the role and as Renaud he does fall in love with Armide but is saved in the end.

Bass Joao Fernandes sings the role of Hidraot, King of Damascus. Although Fernandes has a fine bass voice, he had difficulty being heard at times and for the first time in an Opera Atelier performance I felt there were certain imbalances between pit and stage. Some of the singers needed a bit more volume for the audience to hear them cleanly and comfortably.

It has become de rigueur to expect superb choreography from Jeannette Lajeunesse Zingg and the Artists of Atelier Ballet and there were up to their high standard this year.

The sets by Gerard Gauci consisted mostly of hanging tapestries but they were colourful and suggested perhaps a medieval and perhaps a baroque milieu.

The Tafelmusik Baroque Orchestra was conducted by David Fallis.

Opera Atelier is doing its best to get us attuned to baroque operas but their static nature does not always stand them well.

For its next production, Opera Atelier is moving into the 19th century German repertoire with Carl Maria von Weber’s Der Freischutz which opens on October 27, 2012.
____

Armide by Jean-Baptiste Lully, presented by Opera Atelier, opened on April 14 and ran until April 21, 2012 at the Elgin Theatre, 189 Yonge Street, Toronto. www.operaatelier.com