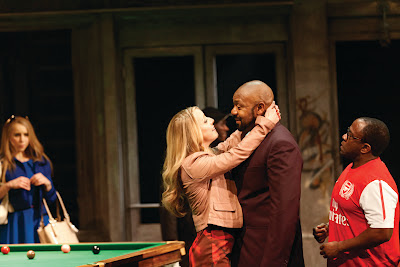 The Comedy of Errors is one of Shakespeare’s early plays and no one will argue that it is one of his best. It is a classic comedy of mistaken identities and it relies heavily on the Roman prototypes in the genre. What can be done with the play? In the hands of an ordinary director and company, you can get a few laughs and be grateful that you were taken through the text.

In the hands of a genius like Director Dominic Cooke, The Comedy of Errors can be turned into a riotous comedy, imagined anew, full of hilarious slapstick and inventiveness that you may never think of by simply reading the text.

The opening scene of the play consists of a long speech by Egeon of Syracuse (Joseph Mydell) explaining how he has been separated from his wife, his identical twin sons and their identical twin servants. He is now in Ephesus looking for them and treats us to a long speech about his troubles.

Cooke will not let us start fidgeting through the scene. Egeon is arrested and robbed in a pretty rough part of town. The Duke of Ephesus (Ian Burfield) appears to explain why Syracusans found in his city are put to death and he is no ordinary Duke. He fits the rough surroundings and acts like a Mafia thug or a brutal dictator.

Cooke’s inventiveness continues throughout the production. The twin brothers are black (Lenny Henry as Antipholus of Syracuse with a thick Jamaican accent and Chris Jarman as Antipholus of Ephesus) and they are simply hilarious. They give highly physical comedy and when they wallop their servants (Lucian Msamati and Daniel Poyser – both just terrific), they really go to market.

The fights get so comically serious at one point that an ambulance and half a dozen medics rush in with straitjackets as they try to catch the crazy twins.

The scene moves from the rough harbor scene of the opening, through some rather tough looking neighborhoods with derelict buildings but we also see a nice outdoor café and a pool hall.

When Adriana (the delectable Claudie Blakley) finds her “husband” (the wrong man, of course) in the pool hall and tries to convince him to go home for dinner, her entreaty becomes so physical that the poor man who has no idea of what is going on, gets an erection. She has a very attractive sister, Luciana (Michelle Terry) and they make a nice comic pair.

When the servants yell insults at each other over Antipholus of Syracuse’s apartment intercom, they end up in a farting contest that produces belly laughs.

The Comedy of Errors is set in Ephesus which means that it can be anywhere. Cooke’s production designed by Bunny Christie is in modern dress and this Ephesus could be a contemporary city in Turkey or even London. The two servants wear T-shirts with the words “The Emirates.”

Dominic Cooke has done what we hope that every director will do for every production of a play: imagine it or re-imagine it afresh. Many such attempts are made and many fail miserably. Some are grandly successful and can turn even second-rate works into something extraordinary. Cooke has done that and the result is an extraordinary production of The Comedy of Errors and a great night at the theatre.
________

The Comedy of Errors by William Shakespeare played from November 29, 2011 and to April 1, 2012 in repertory at the Olivier Theatre, National Theatre, South Bank, London, England. http://www.nationaltheatre.org.uk/