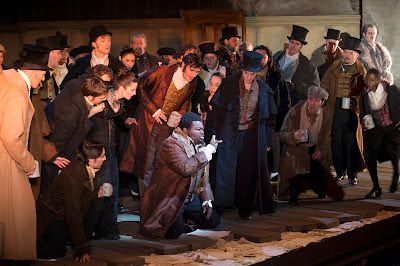 The Canadian Opera Company has opened its spring season with the mostly tried and true The Tales of Hoffmann by Jacques Offenbach. It is a respectable and enjoyable if not inspired production directed by Lee Blakeley with set designs by Roni Toren.

The Tales of Hoffmann tells three love stories of the poet of the title and it ranges geographically from Nuremberg to Paris to Munich and to Venice. All of the travelling to come to the one woman who combines the other three loves.

We are supposed to start in Luther’s tavern where Hoffman will tell his tales but instead we begin in a box-sized apartment where, presumably, our hero lives. This may be fine for a couple of minutes but Blakeley holds onto the idea for so long I started getting claustrophobic. After that there is a lot of ground to cover and the sets are occasionally too dark and strangely unsatisfactory in an opera that includes magical, supernatural and god-knows-what elements.

The first tale is set in Paris where we meet the inventor Spalanzani (Michael Barrett) and his creation Olympia, a mechanical doll that should make him rich. Olympia is sung well by Andriana Chuchman and my only complaint about her is that her doll-like movements are exaggerated to the point of farce. Hoffman falls in love with the contraption and I think more subtle movements are in order. Inevitably and thanks to the anger of Coppelius (John Relyea), Spalanzani’s enemy, the doll is torn apart and Hoffmann sees the truth.

The second story, set in Munich, is about Antonia (Erin Wall) and is a bit less preposterous. She is an opera singer with a hereditary heart condition. She sings; she dies. She is somehow engaged to Hoffmann but is forbidden to see him until he tracks her down and, yes, she sings gorgeously to her death.

The final affair takes place in Venice where we meet the faithless Giulietta (American soprano Keri Alkema), a courtesan who is true to her profession. Hoffman loses his mirror reflection or his other self to a magician, kills a rival in order to secure Giulietta’s love only to see her take off with another man.

The three women are usually sung by a single singer but Blakeley has decided to split the work among three. The bad guys, Lindorf, Coppelius, Dr. Miracle and Dapertutto are sung by Canadian bass-baritone John Relyea. The well-voiced singer did a fine job in delineating the four characters.

American tenor Steven Cole is likewise assigned four roles but they are more comical and he does manage to get a few laughs in a good night’s work.

Mezzo-soprano Lauren Segal gets to pop in and out in a solid performance as The Muse-turned-into-Nicklausse, Hoffman’s friend.

The toughest job of the night falls on American tenor Russell Thomas in the title role. He starts quite strongly and does a very good job with the “Il etait une fois a la cour d’Eisenach” aria. But by the end of the opera we start losing him. Perhaps the house is too big or his voice not big enough for the house.

The fundamental problem is not so much the production as the opera itself. Offenbach called it “opera fantastique” and the plot becomes convoluted with supernatural and almost ridiculous elements that are not convincing on any level. There may be a production that can reduce or elevate these to a satisfactory whole but this one, for all its virtue and vices, simply did not do so.

The last time Tales of Hoffmann was produced by the COC was in 1988. There seemed to be no rush to bring it back it seems. The current production is by Vlaamse Opera of Belgium and is conducted by Johannes Debus.
_____

The Tales of Hoffmann by Jacques Offenbach opened on April 10 and will be performed nine times until May 14, 2012 at the Four Seasons Centre for the Performing Arts, 145 Queen Street West, Toronto, Ontario. Tel: 416-363-6671. www.coc.ca