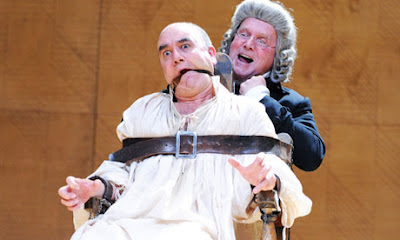 
The Madness of George III by Alan Bennett is a fascinating chronicle play that tells the story of the English king’s mental breakdown in 1788-1789. It is partly history lesson, partly costume drama with some moving and comic scenes leading to a splendid night at the theatre.

George III was a rather dull man but a good king by many standards. He was interested in farming, in learning about what his subjects were doing and in their general welfare. He had fathered fifteen children, thirteen of whom survived into adulthood. He was a busy man.

Alan Bennett’s play presents quickly moving scenes, sometimes just vignettes, of life in the palace at Windsor, in the political circles in London and at Kew Palace.

None of that would have been of much interest to a playwright except for the fact King George goes mad. He descends into madness quickly and is surrounded by political opportunists, servants who act like his overlords and a team of doctors who are no more than arrogant quacks. The powerful king becomes a pathetic human being abused to an extent reminiscent of the fate of King Lear.

David Haig gives a stellar performance as the king. George is by no means humble (you my only speak to him when he addresses you and that goes for the doctors who are treating him). When he goes mad he is put in a straitjacket, tied to a chair and literally tortured by the quacks in the name of medical care. Haig makes us feel sorry for the poor man and glad for him when he eventually recovers.

Clive Francis is superb as Dr. Willis, the “specialist” who along with the other “doctors” bleeds the patient, gives him purging medication and tries to break him down as if he were a horse.

Nicholas Rowe is a humourless but efficient and scrupulous Prime Minister Pitt the Younger in contrast to Gary Oliver as Charles Fox and Thomas Wheatly as Lord Thurlow, colourful and ambitious.

No one can approach Christopher Keegan as the corpulent Prince of Wales and future Regent and George IV in the despicability department. A superb job.

The costumes with the red coats of the officers and the waistcoats and breeches of the rest of the characters and all those fancy wigs make for a pretty lively sight. The sets are rather simple and indeed threadbare. The quickly changing scenes do not allow, I suppose, for an opulent or realistic set and Janet Bird’s design reflects that.

Director Christopher Luscombe keeps the action moving with the play’s numerous exits and entrances under control. The most memorable part of the evening will remain Haig’s performance in the leading role.
______

THE MADNESS OF GEORGE III by Alan Bennett opened on January 18 and played until March 31, 2012 at the Apollo Theatre, Shaftesbury Avenue, London. www.apollo-theatre.co.uk