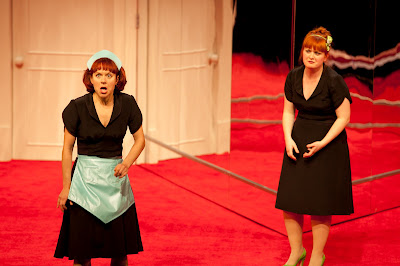 There are times when nothing seems to work.

Canadian Stage is wrapping up its current season at the Bluma Appel Theatre with a production of Marivaux’s The Game of Love and Chance in a new translation and adaption by Nicolas Billon.

The play has been around since 1730 and has a simple but potentially very funny plot. Silvia is engaged to Dorante but they have never met. He is coming to her house to meet her. She has the bright idea of trading places with her maid in order to judge her fiancé’s character better. He has the same idea. Unbeknownst to each other, the two couples meet with the servants pretending to be masters and vice versa.

In the 18th century the play was performed in the commedia dell’arte style of broad comedy with stock characters that one suspects had people rolling in the aisles with laughter. In those days the difference between a rich lady and her maid would have been obvious and a source of mirth if one pretended to be the other.

Billon and director Matthew Jocelyn have brought the play to the 20th century and the servants and masters wear almost the same clothes and the social and class distinction almost vanishes. Remove the social milieu, remove a lot of the laughter.

Jocelyn tries to orchestrate the action and move forward into a farce with people bumping into each other, walking into walls and getting in some physical comedy but unfortunately almost nothing works.

Trish Lindstrom is the well-born Silvia who trades places with her maid Lisette (Gemma James-Smith) but they are almost interchangeable. The well-born Dorante (Harry Judge) is different from his servant Arlequino (Gil Garnett) and the latter goes in for a considerable amount of overacting which results in very few good laughs.

Silvia’s brother Mario is presented as a farcical gay man with the flick of the wrist and the contortion of the body and try as he does Zach Fraser brings in, again, very few big laughs. William Webster as Silvia’s father is the straight man and he does his job well.

The set in the opening scene consists of a red carpet and a bench seat with a white wall as background. The wall seems to be in need of some paint. The wall is removed for subsequent scenes and we have mirrors and walls in the background. In other words, the play is set in a 20th century vacuum and not in any definite social world. This may be stylish but it does not work. It simply takes the humour out.

Canadian Stage again reminds us that Artistic and General Director Matthew Jocelyn’s mission is to produce “multidisciplinary theatre with a focus on emerging performance styles that integrate theatre with other artistic mediums such as dance, film, visual arts and more.” Now I am not sure if any of that applies to the current production but I would have settled for an evening of laughter and been very grateful for seeing a play that I had not seen for almost twenty years.

This is a co-production Centaur Theatre of Montreal and that only adds to the disappointment.
__

The Game of Love and Chance by Pierre Carlet de Chamblain de Marivaux in a new translation and adaptation by Nicolas Billon opened on April 19 and will run until May 12, 2012 at the Bluma Appel Theatre, St. Lawrence Centre for the Arts, 27 Front Street East, Toronto, Ontario. www.canadianstage.com