LA TRAVIATA IN INSPIRED AND OUTSTANDING PRODUCTION LIVE FROM THE MET 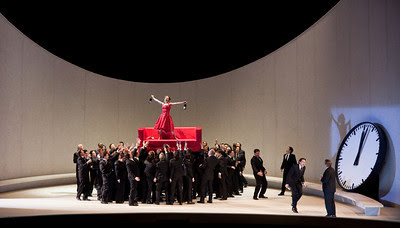 When the ardent lover tries to convince the woman of his pursuit to succumb to his entreaties, he points out that they do not have all the time in the world. He tells her that “at my back I always hear/ Time’s winged chariot hurrying near.” That is in Andrew Marvel’s To His Coy Mistress.

Director Willy Decker seems to have taken that point well in his inspired and brilliant interpretation of La Traviata that was shown world-wide in movie theatres on April 14, 2012, live from The Metropolitan Opera on New York.

With a minimal of judicious touches to the libretto, Decker has produced an almost new work from the familiar opera and a production that will leave you gasping with emotion and admiration.

Decker and his Set and Costume Designer Wolfgang Gussmann used a large clock, five ordinary couches and some sheets of cloth. Those are all the props on a starkly bare semi-circular set with a bench.

The opening scene of La Traviata is a party scene in a (usually) lavish setting. In this production Violetta (Natalie Dessay) staggers onto the empty stage. There is a large clock and an unidentified, white-haired man in a trench coat. We will see him a number of times and realize that he is in fact Fate, the Fate that stalks Violetta.

The party starts with a rousing drinking song, the famous “Libiamo,” an expression of the care-free life devoted to pleasure. Not so for Alfredo (Matthew Polenzani), Violetta’s new lover; he is not laughing or even smiling when he sings that aria. There may be gaiety on the surface but the real atmosphere is utter somberness.

Decker has an inspired idea for the second act where Violetta and Alfredo have moved to the country and discover that they are broke. In this production, he makes a small change in the scene by having Violetta present while Alfredo sings of his blissful new life. This is done while the maid is in Paris selling off things to pay for the bills. The only difference in the set between the opening party scene and the house in the country is some colourful material to cover the couches.

The final scene is heart-wrenching as Violetta fights against approaching death with hope and desire to live. In the end the last person that she embraces is Fate and then collapses to her death.

These are just a few examples of the numerous and meticulous details introduced by Decker in this production that amazes you at every turn.

The star of the show is Dessay who delivers an unforgettable Violetta. She sings with deep emotion and acts with a depth and feeling rarely seen in opera. Decker’s insistence on the passage of time and the inevitable encounter with Fate is greatly helped by Dessay. The youthful hue no longer sits on Dessay’s skin like the morning dew as it does not on Violetta’s. Dessay delivers a sense of fear and desperation at the knowledge that time is passing. Near the end, when the clock is removed because it no longer matters, a young Violetta is carried on the stage by the Parisian revelers. Dessay may not have all her high notes intact but in this production that adds rather than subtracts from her characterization.

Matthew Polenzani sang and to some extent acted as Alfredo. Polenzani has a fine voice but his acting can only be described as adequate. He probably suffers much in comparison to Dessay’s dominance in the lead role.

Dmitri Hvorostovsky has the juicy role of Giorgio Germont, Alfredo’s father who has to tell Violetta that she is no good for his son and to his son that he should dump the courtesan. He needs to plead and be noble and Hvorostovsky has no problem garnering the resonance for “Di Provenza il mar” and the scenes with Violetta.

Fabio Luisi conducted the Metropolitan Opera Orchestra at a deliberate pace as the chariot of time led us inexorably to the end of a great production of an opera.
____

La Traviata by Giuseppe Verdi was shown Live in HD from the Metropolitan Opera on April 14, 2012 at the Cineplex Odeon Eglinton Town Centre Cinema, 22 Lebovic Avenue, Toronto, Ontario, (416) 752-4494 www.cineplex.com/events and other theatres.
Posted by James Karas at 3:17 AM