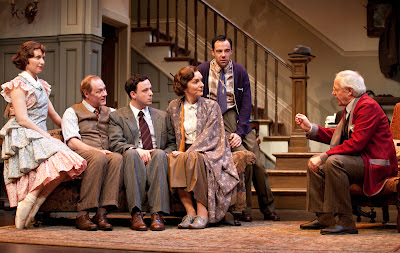 Two of the characters in Kaufman and Hart’s wonderful comedy You Can’t Take It With You make firecrackers in the basement. They are amateurs and their firecrackers are very unreliable. Sometimes they work and sometimes they do not.

The firecrackers serve as a good metaphor for the current production of the play by Soulpepper at the Young Centre in Toronto. Some of the lines of the play come off hilariously, others sputter or simply fall flat. In the end you are left wishing that director Joseph Ziegler could have mustered a more cohesive production where all the lines went off like well built firecrackers.

You Can’t Take It is a classic play of the American depression. It premiered in 1936 and it is a feel-good play. It presents a large family of loveable eccentrics in their house in New York, somewhere near Columbia University.

Martin Vanderhof (Eric Peterson) is the paterfamilias who decided to stop working thirty-five years ago and he has relaxed and enjoyed life ever since pursuing hobbies like collecting snakes and attending commencements at Columbia University. Peterson plays Vanderhof as an overly spry and active old man. He gets a few laughs but I think Martin is the centre of gravity and wisdom of the play and he should not be overplayed for cheap laughs.

Martin’s daughter Penny (Nancy Palk) is a free spirit who was a painter but turned to playwriting eight years ago when a typewriter was delivered to her house by mistake. Palk underplays Penny but is quite good. Her husband Paul (Derek Boyes) is making firecrackers in the basement with his friend Mr. De Pinna (Michael Simpson) who came to the house some years ago and just stayed. Boyes’s Paul is a decent man while De Pinna is a bit of a fool who poses as a discus thrower for Penny’s painting talents.

One of the main sources of laughter in the play is a Mr. Kolenkhov, a Russian dance teacher. He is an effusive type with a thick accent and he can be hilarious. Diego Matamoros was miscast in the role. It is not too much to expect the actor playing the role to be able to do a semi-decent Russian accent. Matamoros could do nothing of the sort and he should have taken another part in the play.

There is a love story between Alice, one of Penny’s daughters and Tony (Gregory Prest), the handsome son of Mr. Kirby (John Jarvis), Alice’s rich employer and his snooty wife, Mrs. Kirby (Brenda Robins). The two families are worlds apart and the two worlds meet on the wrong night and the result is hilarity. Robins strikes the right note of snobbery and the word-game during the families’ get-together is done well.

Krystin Pellerin as Alice is beautiful and an attractive character but I did not feel the surprise and shock in her reaction when Tony and his parents arrive for dinner on the wrong night and find the pandemonium that passes for the Vanderhof house.

Sabryn Rock as Reba was a dud but Andre Sills as Donald went off perfectly. The Duchess Olga (Maria Vacratsis) and Gay Wellington (Raquel Duffy) the drunken actress got all the laughs assigned to them.

The set designed by Christina Poddubiuk was a very ordinary living room despite being occupied by snakes, outrageous people and activities such as ballet lessons, painting, and a drunken actress. It did not capture any of the outrageousness or eccentricity of the family.

This was reflected in the overall impression of the production. There were flashes of humour and the play fought its way out of the placid approach adopted by Ziegler.

Kaufman and Hart seem to have gone out of style and the last time I saw this play was at the Shaw Festival in 1998. That is a very long coffee break and Soulpepper deserves full credit for this revival even if it is not entirely successful.
_________