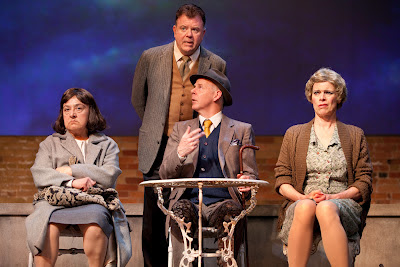 In 1970, British playwright David Storey’s play Home opened at the Royal Court Theatre in London. It starred John Gielgud and Ralph Richardson and it was a theatrical event of the highest order. One should abstain from phrases like “they don’t make them like they used to” but we never had Prohibition in Canada so I will mutter the phrase sotto voce.

Soulpepper Theatre Company has revived the play for Toronto audiences and it is now playing at the Young Centre in Toronto. The play may have had other productions in Toronto but the only one that has come to my attention is one in 1974 at the New Theatre which seems to have disappeared many moons ago.

I hasten to add that if they don’t make them like they used to, Soulpepper proves that it can do a damn good job and to hell with comparisons.

Home is an extraordinary play that develops slowly and somewhat mysteriously and delivers a big punch line. Knowing the punch line does not affect the high quality of the work or the enjoyment of this marvelous production but it does add an edge to your sense of wonder as you are walking out of the theatre.

The set consists of a white metal table and two chairs in what may be a park or a garden. There is a brick wall at the back and we see the blue sky with some clouds. We see two well-dressed gentlemen chatting. They met recently and they talk in a staccato dialogue with frequent changes of subject, some non-sequitors and a considerable amount of humour.

Jack (Oliver Dennis), carrying a smart walking stick and wearing a suit with a vest, chats amiably about a wide range of topics with wit and indeed some erudition. He discloses that he wanted to be a priest at one time but could not make up his mind about being Catholic or Anglican.

Harry (Michael Hanrahan) is dressed just as smartly and is very finicky about his appearance. He removes signs of fluff from his clothes as well as from Jack’s. He is equally adept at the conversation with Jack and discloses that he wanted to be a dancer at one time.

Dennis and Hanrahan give superb performances. They capture the essence of their characters and interact with finesses and precision. Much of the success of the production rests on the perfect timing of the two actors in a dialogue that appears simple.

The men leave the stage and two women appear. They are Kathleen (Brenda Robins) and Marjorie (Maria Vacratsis). They are the antithesis of the two men. Their appearance, dress and manners are low class and quite slovenly. Kathleen screeches when she tries to laugh at things that do not appear to be very amusing. Like the men, they talk about a variety of things and make observations but always from a lower class point of view and manner. Similar comments and praise are due to the women for their individually superlative acting and for their interacting

Alfred (Andre Sills) is the fifth character in the play and he has a relatively short, mostly walk-on appearance but he lets the cat out of the bag in case some people in the audience have not clued in about where we are.

Albert Schultz gets five stars for his meticulous directing.


David Storey’s star has faded for some time now and his plays have been ignored for far too long. Give full marks to Schultz and Soulpepper for giving us a subtle, well-tuned, perfectly paced and simply outstanding production.
_________