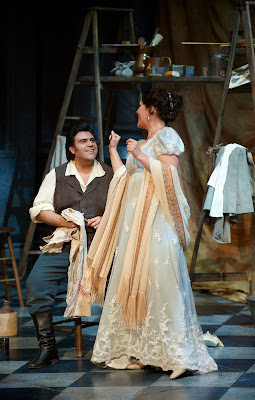 It has become de rigueur for the Canadian Opera Company to offer two very different works for its “winter season” (two operas hardly constitute a season, but let that be) – a familiar chestnut and something very new or unusual. The choices for 2012 are Puccini’s Tosca and Kaija Saariaho’s Love from Afar. The latter work is a 21st century composition by a Finnish composer and is directed by Daniele Finzi Pasca of Cirque du Soleil. How is that for unusual?

The current production of Tosca is a revival of the 2008 staging by Scottish director Paul Curran. It was good then and it is good now and the cast is even better.

The COC has two casts for Tosca and Cavaradossi and one singer for Scarpia. I saw Adrianne Pieczonka and Carlo Ventre on opening night and she gave an exceptionally fine performance. Pieczonka has a big, beautiful, ringing voice that is well-suited to the tempestuous heroine. Her rendition of “Vissi d’arte” is full of longing and sustained pathos and that alone is almost worth the price of admission.

Uruguayan tenor Ventre suited the role of the heroic Cavaradossi both physically and vocally. If he sounded a bit rough in “Recondita armonia”, his first aria, he made up for it and delivered an outstanding “E lucevan le stele” and proved that he can hit a high note and maintain it when he exultantly exclaimed “Vittoria.”

American baritone Mark Delavan was a disappointment as the evil Baron Scarpia. The main problem was volume – on many occasions he simply could not be heard over the orchestra. In other passages when the orchestra was subdued his fine baritone voice was a pleasure to hear. Scarpia displays the depth of his depravity and his lust for our heroine when he exclaims “Tosca you make me forget god.” This should come out like a shot from cannon, as a statement of ultimate sacrilege. We barely hear it. The statement is important, of course, because Tosca’s last words as she jumps to her death are “O Scarpia, we meet before God!”

The Sacristan is a minor role but he is usually good for a few chuckles at the beginning of this dour opera. Unfortunately Canadian bass-baritone Peter Strummer and by extension director Paul Curran do not take full advantage of the chances to provide us with a few light moments.

Tosca requires three sets: the interior of the church of Sant’Andrea della Valle, Scarpia’s rooms in the Farnese Palace and the ramparts of Castel Sant’Angelo. Set and Costume Designer Kevin Knight does a very good job on all counts. The church is grandiose within the space available at the Four Seasons Centre; Scarpia’s rooms are indicative of wealth and power without the gimmicks, for example, of the red couches in Luc Bondy’s production at New York’s Metropolitan Opera. The ramparts in Act III with the chain link fence are also appropriate and convincing.

The COC Orchestra is conducted by Paolo Carignani and the underused COC Chorus sounds superb.

The COC then delivers a first-rate, solid production of a well-known opera that should please opera goers.
___

Tosca by Giacomo Puccini opened on January 21 and will be performed fourteen times with some cast changes until February 25, 2012 at the Four Seasons Centre for the Performing Arts, 145 Queen Street West, Toronto, Ontario. Tel: 416-363-6671. www.coc.ca