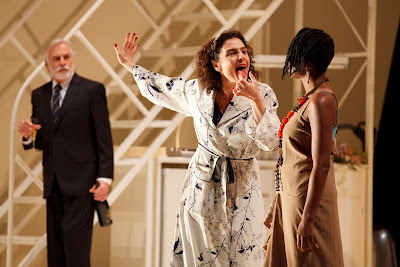 If you are searching for Greek tragedy in Toronto, you will probably not be surprised to find none. May we say “almost” none? Canadian Stage has brought something akin to it in the form of Martin Crimp’s adaptation of Sophocles’ Women of Trachis. Crimp entitled his play Cruel and Tender and it is now playing at the Bluma Appel Theatre.

Sophocles’ play tells the story of Heracles and his wife Deianira who inadvertently poisons him when she attempts to win back his love. Heracles is away waging war but his objective is a woman, Iole, and not simple conquest. To make sure that Heracles remained faithful to her, Deianira gave him a tunic soaked in the blood of a centaur. But instead of acting like a love charm, the tunic caused unbearable pain that spelled the end of the great hero.

Crimp is reasonably faithful to Sophocles’ play. Amelia (Arsinée Khanijian) lives near an airport and is waiting for her husband The General (Daniel Kash), to return from the war on terror that he is waging. As with Heracles, however, the General’s objective is a woman, Laela (Abena Malika), and not the rooting out of terrorism. In fact Laela is brought to the General’s home as a war victim-cum-trophy.

Amelia is worried about her husband’s feelings for her and pours the contents of a vial on The General’s pillow having been promised by a chemist that the chemical will restore her husband’s fidelity. It causes excruciating pain instead.

The performance lasts ninety minutes and the first two thirds are dominated by Amelia who is anxiously waiting for the return of her husband. Khanijian, directed by her husband Atom Egoyan, gives a highly physical performance. She uses her hands, arms and body almost constantly. She seems to be conducting herself as she delivers her lines. The interesting part is that there is relatively little emotional depth in her performance, indeed in the entire production.

Sophocles’ Chorus of women of Trachis is replaced by a Physiotherapist (Cara Rickets) and a beautician (Sarah Wilson) and they are joined by the Housekeeper (Brenda Robins). Other characters include Jonathan, a government minister (Nigel Shawn Williams), and a journalist named Richard (Thomas Hauff). The Chorus and these characters deliver most of their lines like messengers. There is scant emotional involvement.

The General’s son James (Jeff Lillico) does show some emotion but what he and Laela have to offer amounts to relatively little.

In the final half hour we see The General who is in agony and more or less demented. Kash invests his performance with pain and emotion and we are given projected close ups of his contorted face.

The single set consists of stark off-white walls with narrow windows at the top and a staircase in the middle. There are almost no props except for a chair.

The opening line of the play, delivered by Amelia speaking to the audience, is: “There are women who believe that all men are rapists.” She does not believe that and there is no evidence in the play to support that proposition. True her husband is waging war for a woman but his means of acquiring her is military conquest not rape.

Crimp has done a reasonable job of being faithful to the plot of Women of Trachis and transferring it to the 21st century. Egoyan delivers a cerebral production which despite some dramatic acting by Khanijian and Kash, I found surprisingly unmoving. What a waste of talent.