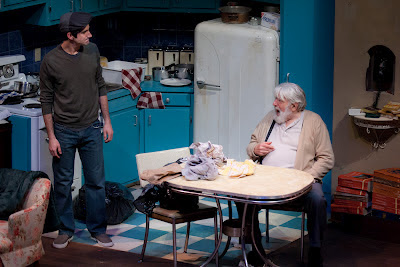 Visiting Mr. Green by Jeff Baron is one of those simple, funny, heartwarming plays whose plot flows seamlessly from beginning to end. It tells a simple story about a young man who is ordered by a judge to visit an old recluse. It is the choice production of the Harold Green Jewish Theatre Company and it is currently playing at the Jane Mallett Theatre in the St. Lawrence Centre for the Arts.

The play’s star attraction is Theodore Bikel who at eighty-eight deserves a round of applause for longevity let alone talent. The other star of this two-hander is Aidan deSalaiz. The play is expertly directed by Jen Shuber.

The plot is quite simple. Mr. Green (Bikel) is an old man living alone in a small, unkempt apartment in New York. He inadvertently walks into traffic and is almost struck by a car driven by Ross Gardiner, a young Harvard graduate who is working in the financial sector. Ross is charged with reckless driving and an imaginative judge orders him to visit Mr. Green every Thursday for six months.

Mr. Green is a gruff man, a recent widower, who does not want to be disturbed. He claims that he was married or 59 years and never had an argument with his wife. Neither we nor Ross believe that.

Initially, the two men seem to have nothing in common until they discover that they are both Jews. That is a start but they soon discover that their Jewishness is of little help in matters like homosexuality and interracial marriage. Ross is gay and Mr. Green cannot fathom that. He considers it a betrayal of what Jews stand for and there is no such thing as a gay Jew, in any event.

Mr. Green claims to have no children but we discover that he in fact has a daughter and he has written her off because she has married a non-Jew. As far as Mr. Green is concerned his daughter died when she married a “goy”.

The two men work out the combined theme of intolerance with humour and pathos until a resolution is reached. Bikel, the old veteran, shuffles around the stage and brings out the humanity, bitterness, nostalgia and humour of this patriarchal-looking old man. His prejudices are finally broken down or at least diluted as he is forced to face himself and his religious beliefs.

The gay Ross accepts his homosexuality and stands up to his bigoted father and we are left hoping for more tolerance and understanding. As I said it is a heart-warming story and a marvelous play with exceptional performances.
______